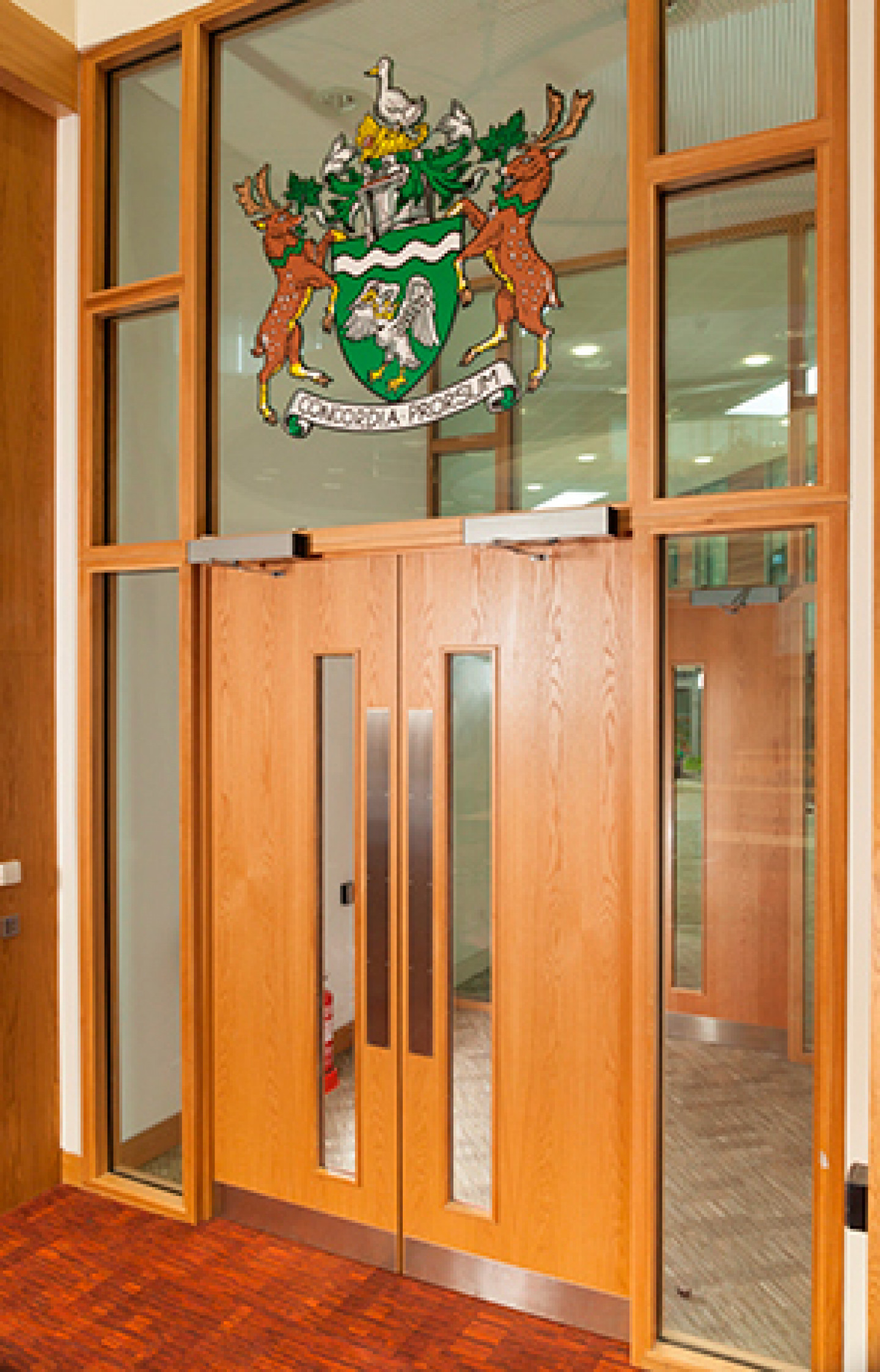 The doors of Aylesbury Vale’s Council Chamber can be now opened and closed by Relcross LCN Auto Equalizers. Both entrances to the ‘Oculus’ at the Council’s Gateway offices and conference centre in Aylesbury feature two pairs of double doors at either end of an entrance vestibule. All these doors have been fitted with Auto Equalizers controlled by wall mounted push pads that each open and close one pair of doors. Additionally, two single doors that provide access to the toilet facilities adjacent to the main room have been similarly equipped.

Aylesbury Vale District Council’s commitment to democracy at all levels of its activities is reflected in the provision of equal access for all as promoted by the Equality Act of 2010 and its predecessor the 1995 DDA. What better way to demonstrate this than to ensure that the large, heavy doors to the central focus of local democracy can be opened by any of the council’s electorate. The Oculus forms the largest conference room in the Gateway Conference Centre located at the Aylesbury Vale Council HQ.

Many standard door closers could not be fitted to doors of this size or could not cope with the fire specifications. Roger Hudman of installer Rowsman Ltd suggested the pneumatic powered Relcross system as he has had considerable success with it before. The system has three main components. Firstly the door operator - one per door leaf - is usually mounted to the frame above the door. This comprises the Relcross LCN REL.4800 Auto Equalizer. When the switch is actuated, air pressure is used to overcome the resistance of the spring to open the door. When the air is released the spring and hydraulics take over, closing the door in a controlled mechanical fashion.

Secondly, each system (or group of doors) has a separate controller incorporating one air valve per door or pair of doors. This enables both doors to be opened in unison and held open long enough to allow users through the entrance. Controllers are custom built to give optimum performance for each installation.

Thirdly, all Auto Equalizer systems are reliant upon a source of compressed air to power them. The capacity of the compressor is selected carefully at the specification stage to accommodate the likely traffic profile (i.e. frequency of use of doors) and the distances involved between the compressor and the doors to be controlled. Reserve tanks can be added where necessary. At Aylesbury Vale a single Bambi HT24-2p compressor, with a displacement of 140 litres per minute, powered all 10 Auto Equalizers.