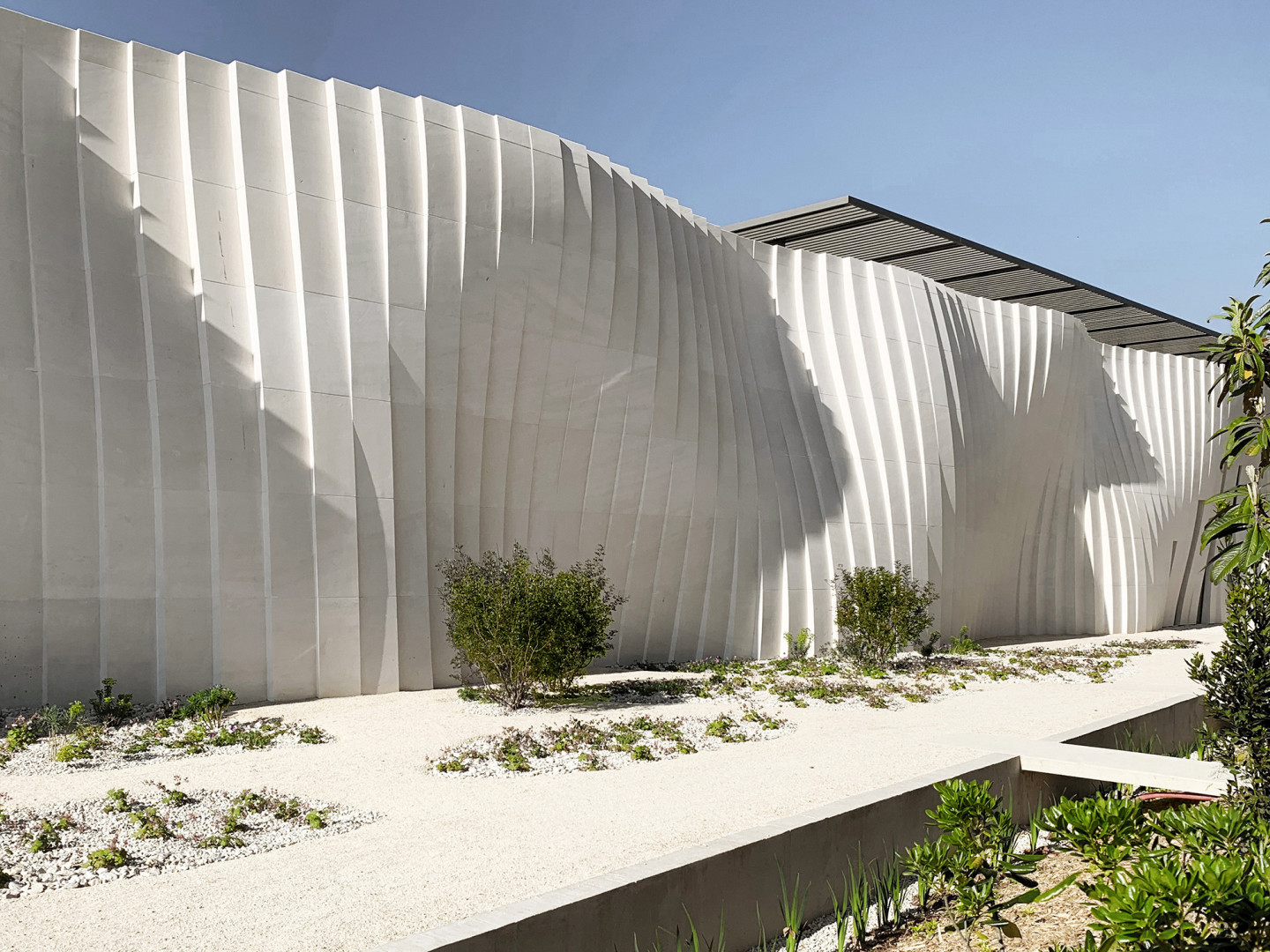 Oliver Wainwright reveals how the New Stone Age exhibition presents a material that, although used for millennia, now 'has the potential to revolutionise contemporary construction as we know it.'

A long stone plank stands on Store Street in central London, raised on triangular wooden props, giving it the look of a medieval battering ram, ready to lay siege to Tottenham Court Road. This great masonry beam means no harm to the shoppers – but it could well prove to be disruptive in another way.

The slab in question is a prototype chunk of a structural stone floor, an impressively slender thing, 12 metres long and just a few centimetres thick. Cut straight from the quarry and transported to site ready to install, such a floor has a carbon footprint of just 15% of a standard concrete floor – and it’s cheaper, lighter and faster to install.

“Stone,” says architect Amin Taha, “is the great forgotten material of our time. In 99% of cases, it’s cheaper and greener to use stone in a structural way, as opposed to concrete or steel, but we mostly just think of using it for cladding.”

Taha is on a mission to show the potential of stone beyond decoration. Together with stonemason Pierre Bidaud and engineer Steve Webb, he has curated an exhibition at the Building Centre that aims to reveal how this primal material, used to create shelter for millennia, has the potential to revolutionise contemporary construction as we know it. Brace yourselves for the dawn of the New Stone Age. 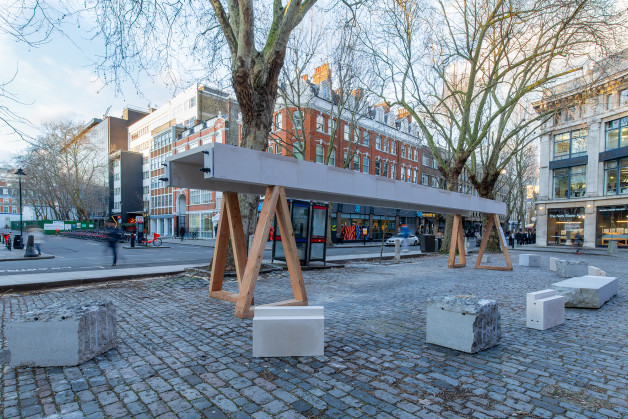 The architect, engineer and mason have form in radical stonework. They recently worked together to build 15 Clerkenwell Close, a six-storey block of apartments and an office – including Taha’s home and studio – made from a structure of monolithic stone blocks. The result looks like what might have happened if Mies van der Rohe had been weaned on The Flintstones. It features a load-bearing exoskeleton made of massive chunks of limestone brought straight from the quarry.

The blocks have been left with their raw quarrying marks exposed and stacked on top of each other to form columns and beams. Some of the slabs’ faces show the lines where they were drilled from the rock face, others are sawn smooth as if cut by a cheese wire, while some bear the rugged texture of the sedimentary seam, freshly prised from the Earth’s crust.

The building’s geological power was too much for one Islington councillor, who complained that the “awful” building was out of keeping with the historic neighbourhood, and ensured that a demolition notice was issued, based on a supposed breach of planning permission. Taha finally won the case last year, on the proviso that the smooth stone be roughened up to look like the rest (a process which, after testing, has thankfully proven structurally too risky to carry out).

It seems that the planning battle has only galvanised the trio. They are now determined to spread the gospel of stone, broadcasting their petraphilia to anyone who will listen, with the devotion of geological evangelists.

When you step inside the Building Centre, you are immediately confronted with a large model of a speculative proposal for a 30-storey office tower – designed to be made entirely from stone. It looks like a series of Clerkenwell Closes stacked on top of each other, the chunky stone columns getting progressively thinner as they rise towards the clouds.

“We wanted to prove that a solid stone tower is eminently possible,” says Taha, handing me a substantial technical report that makes a hard-nosed case for such a building on grounds of both cost and carbon footprint. Using stone for the core, structure and floors, they argue, would be 75% cheaper than a steel and concrete structure, and have 95% less embodied carbon. The primary reason for the saving is that, while concrete and steel have to be fireproofed, weathered, insulated, then clad, a stone exoskeleton can be left exposed.

Substituting the stone floor for one made of cross-laminated timber, meanwhile, would make the building carbon negative – so much so, the designers say, that it could offset the embodied carbon of an equivalent tower built of concrete and steel. Images show the craggy stone monolith standing amid the City of London’s cluster of towers, as a welcome contrast to the glassy menagerie of the Gherkin, Cheesegrater and Scalpel.

Elsewhere in the exhibition, a full-scale prototype of a “flat vault” structural floor dangles from the ceiling, showing how thin blocks of stone can be bolted together to form a three-by-three-metre span, just four centimetres thick. Taha is currently working on a private house where the same structural principle will be used to make a 12-metre-wide column-free floor. On a plinth nearby stands a beautiful carved stone base of a wooden column, with decorative motifs digitally milled from a computer model using a CNC stone lathe, another prototype for a forthcoming project. There are models of spiralling cantilevered stone stairs, too, along with laminated stone vaults made from quarry waste and layered to make a kind of undulating stone plywood. The mineral possibilities, it seems, are limited only by architects’ and engineers’ imaginations – and contractors’ willingness to embrace them. 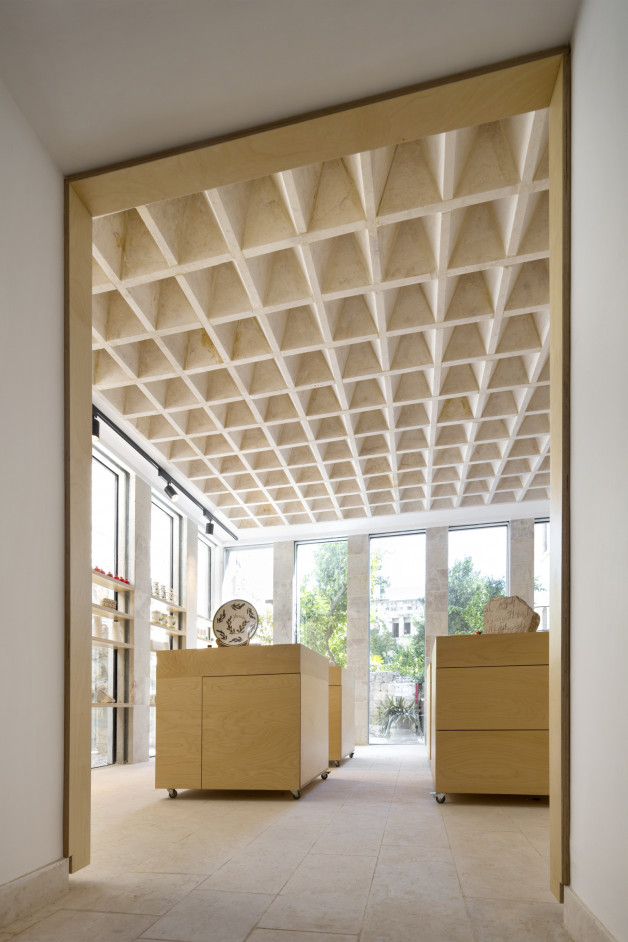 “The main obstacle is the laziness of the building industry,” says Bidaud, who trained in France as part of Les Compagnons du Devoir, a medieval guild of journeymen that continues to this day, before moving to England to join The Stonemasonry Company. He says that French stonemasons are still trained in the structural properties of stone, not just decorative uses, while French quarries issue strength certificates, making it much easier for architects to specify stone for structural purposes.

Engineers’ training is lagging behind too, says John Gerrard of Webb Yates, with stone entirely absent from structural engineering degrees. “None of this is new,” says Gerrard, explaining that their flat vault uses a centuries-old technique. “It’s simple engineering, but we’re having to relearn how to do it.”

Along with Taha’s projects, the exhibition includes number of radical contemporary examples of structural stone from around the world. One of the most impressive comes from Palestine, where Elias and Yousef Anastas have been working with stonemasons in the West Bank to reinvent traditional techniques. Their recent project for an extension to a 12th-century monastery in Abu Ghosh near Jerusalem sees a remarkable coffered ceiling made from 169 interlocking wedge-shaped blocks of stone. Looking as if the lengths of stone have been woven together to form the ceiling, the technique was inspired by 17th-century French engineer Joseph Abeille, who patented a flat vaulting technique in 1699, where the slanting geometries of the blocks allow the load to be transferred across the grid.

The work of French practice Perraudin Architecture also stands out, from its handsome social housing project near Toulouse, built from 40cm-thick blocks of limestone, to its scheme for a 20-storey stone tower in Switzerland. Experimental Spanish office Ensamble Studio features too, with its beguiling Ca’n Terra house in an abandoned quarry in Menorca, a design-conscious troglodyte’s paradise.

The tactile qualities of stone are clear, but, for Taha, the environmental argument is what makes it such an important material to champion. “As a profession, we’re not thinking clearly about the embodied energy of building materials,” he says. “The perverse thing about concrete is that you take limestone, crush it, then burn it, by which time it loses 60% of its structural strength – so you then have to put steel reinforcement inside it. It’s total madness.”

By embracing stone as combined superstructure and external architectural finish, he says, we can save 60-90% of CO2 emissions for these key building elements. “And we’re standing on a gigantic ball of molten rock, so we’re not going to run out of stone any time soon.” 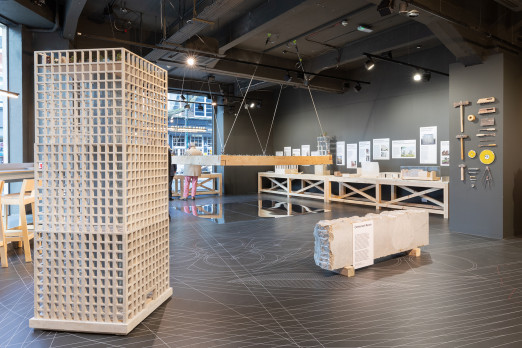