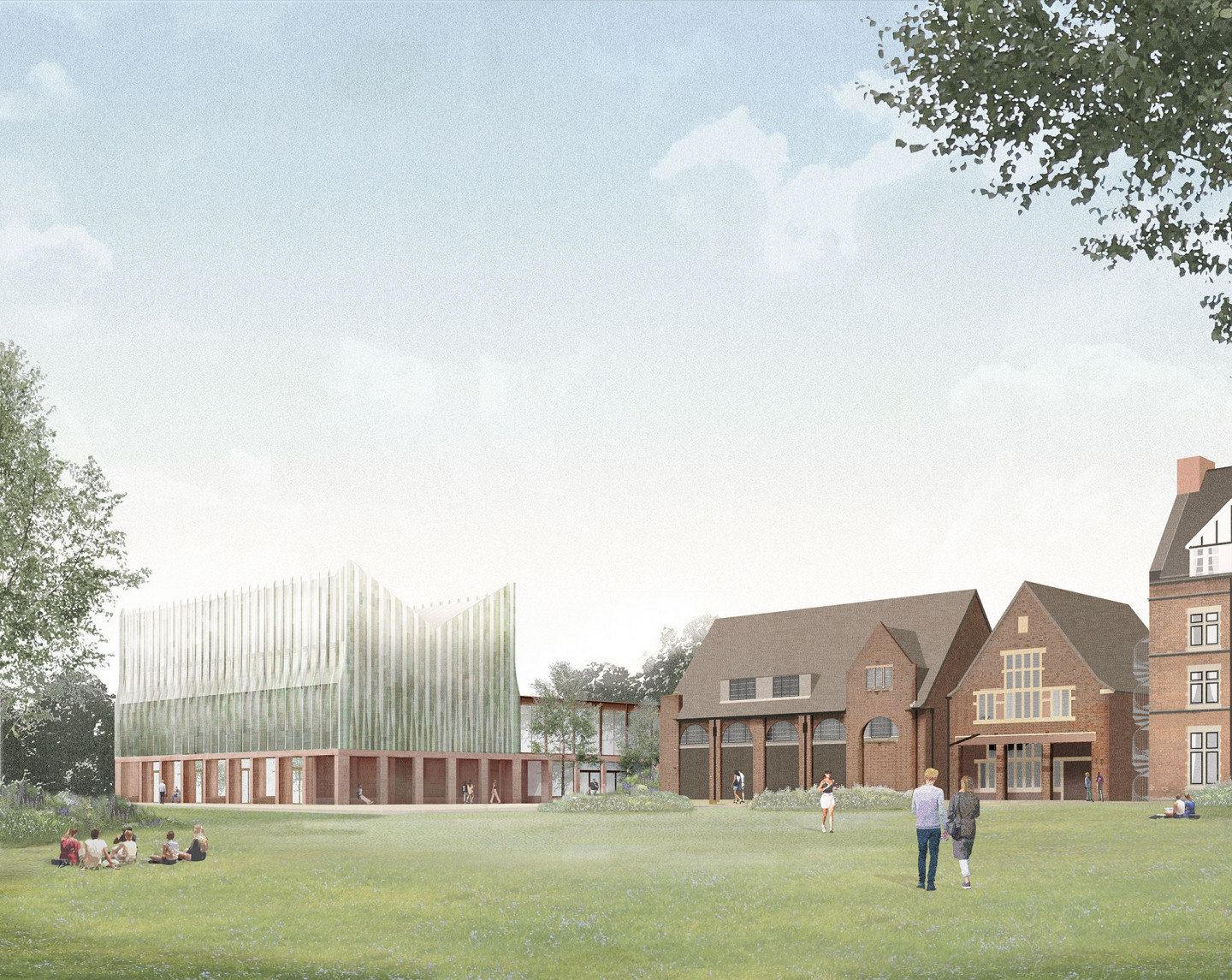 In 2017 Feilden Fowles’ faience proposal won a competition to be the New Dining Hall for Homerton College Cambridge. We spoke to architect Eleanor Hedley about structural ceramics, appreciating pub architecture and avoiding pastiche in the pursuit of ‘Arts and Crafts for the 21st century’.

The office of Stirling-prize nominated practice Feilden Fowles sits in an unsuspecting street in Waterloo. But walk through the gate and behind the anonymity of the street wall and you are met by the oasis of a courtyard, with a path leading on to an urban farm complete with honking geese giving you the side-eye.

The practice’s elegant timber and glass faced office is filled with samples and material tests for projects, including glints of the unique ceramic proposed for Homerton College. Featured in the Hand Held to Super Scale exhibition, the shimmering blue-green-purple patina of the large faience (architectural ceramic) ‘pots’ and are representative of a return to the human hand in architecture. 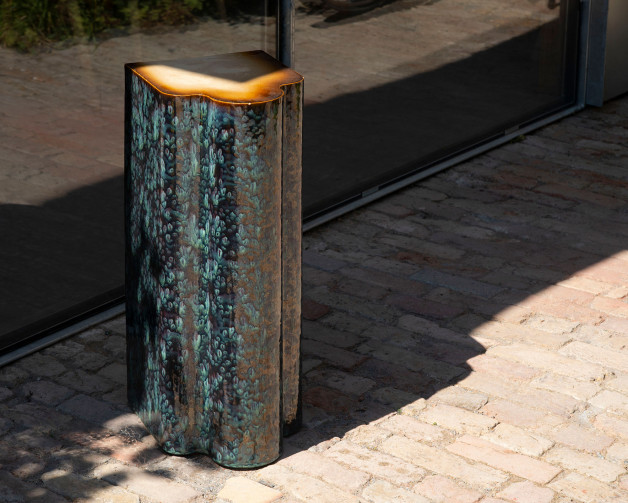 Building Centre: So you won the commission for Homerton College’s New Dining Hall with your proposal for an open-plan hall with a vertiginous faience façade with inverted roof. How and why did you decide to use ceramic in this project?

Feilden Fowles: In terms of the Homerton project, we knew we wanted to use the faience since competition stage.

Homerton is one of the newer Colleges in Cambridge. Originating in Homerton, London, and formerly a teaching College and an all women’s College, it celebrated its 250th anniversary in 2018. While this sounds old it still makes you quite young in Cambridge terms.

The College pride themselves on being forward thinking and welcoming. The New Dining Hall building needs to be a comfortable part of the students’ home at the College, but it also needs to have that same sense of ceremony that is integral to, and expected of, the Cambridge University experience and something that is present in its more historic Colleges.

Because of the nature of the brief, the new building had to be a quite monumental, seen from all sides, and forming a large floor area to the Dining Hall with no interrupting supports. We spent a lot of time looking at our roof structure but decided that pitched options, depending on their steepness, either appeared too barn-like or too ecclesiastical. So then it was a question of, if we’re not going down the route of the roof being the main external feature, how should the cladding do this job?

One of the deciding moments was actually when we walked past a former pub on Kings Cross Road. It has faience in its base – a beautiful kind of water colour glaze. We did a bit of research and then, still at competition stage, between the first and second interview, we contacted Darwen Terracotta. We had a chat with them, they made us a sample, turning it around in six weeks so we could take it to our second interview! 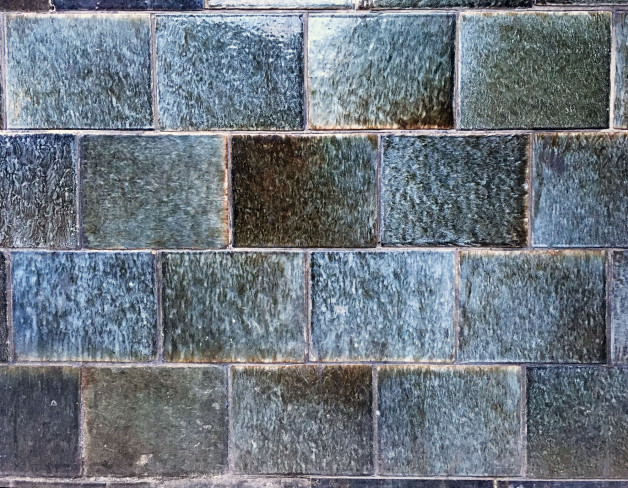 BC: How did you develop the very distinctive glaze?

FF: For the initial sample we spoke about creating something with the green and purple tones because of the existing College buildings the Dining Hall sits next to – its neighbour, the Grade II listed Ibberson Building, has Arts and Craft details and purple tones in its brick.

Homerton College is south of the town centre and has amazing parkland grounds surrounding the buildings, so with the purple hues we wanted something green to echo the mature trees adjacent. We really loved the reflectivity of the material. It is a building in the round, so it will be very responsive to the movement of the sun, weather and seasons.

The façade is formed from a number of faience fins. We wanted these to taper and disappear into the sky and the reflectivity of the material added to that. Because the appearance of the material is so changeable, a lot of the reasons we love it are also why we’ve found it a challenge to represent and render in images!

Developing the glaze was a bit of trial and error. For example we have learned that if you fire the samples flat the sprayed layer of glaze doesn’t spread, it stays in dots and looks a bit like bacteria under a microscope – like it grew. But we preferred the effects of firing vertically, looking to Eric Parry’s Holburne Museum in Bath where you can see how it was glazed as the drips and runs of the glaze are visible. You also get different colours appearing during firing as the glaze runs. These vary with the density and the distance you spray on the glaze speckle, which is something we will specify in time.

We really like that faience is a hand-made, variable thing. The finish is imperfect but fits with the Arts and Crafts ethos of the Ibberson Building that we sit adjacent to on this site. One of the phrases that resonated when we were developing ideas for the building was that of ‘Arts and Crafts for the 21st century’. So whilst there are digital elements of the process – for example each faience fin of our façade is formed from moulds taken from a CNC carved positive – the only way to do the glaze is by hand, a person with a spray. We like the resulting variation, there will be imperfections and actually on a façade of this scale that is part of the charm. 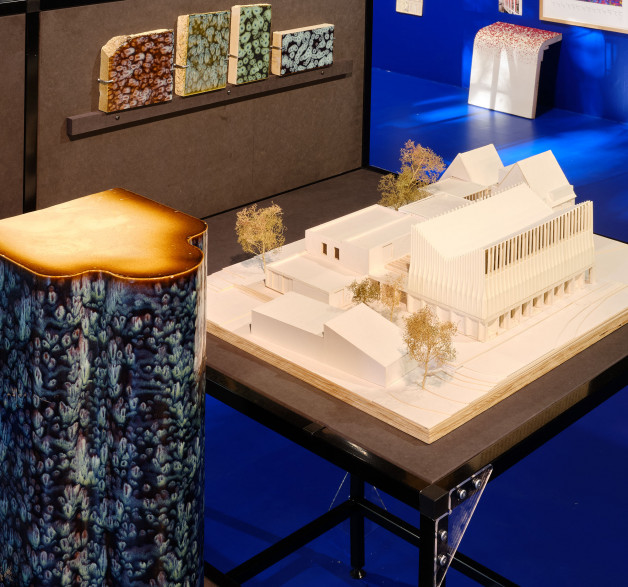 BC: Was Arts and Crafts revival part of the brief?

FF: Not directly, but we found it in the context of the project. The Ibberson Building has lovely details with brick and little bits of flint work. We have brick work on the northern side of the Dining Hall project and have been looking at how to include details in the bricks with glazes or quarry tiles that have a bit of reflectivity. We are using these internally on the floors, they are almost a purple hue which fit with the College’s existing materiality.

The New Dining Hall and Buttery spaces have engineered timber frames, with the ground floor plinth of the building formed in pigmented concrete. We want to express the concrete rather than cover it up so have been testing colours and finishes it in-house to an extent, casting samples coffee cups using gravel from our garden for aggregate – very home made! 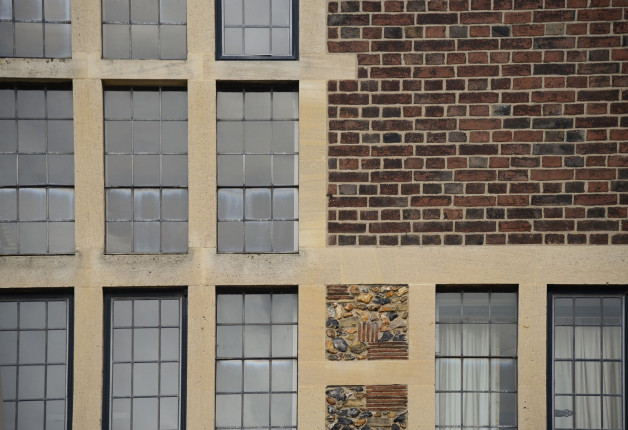 BC: How did you account for the weight of ceramics in the structure?

FF: In the hall, a large timber truss supports the roof. This is pinned back to the external walls which are loadbearing and have some buttressing in their form. In initial design stages we ended up with so many layers of structure – we had the timber supporting the roof and then the walls were masonry and then from this the faience was supported by a steel net that almost wrapped around the building.

So with the structural engineers, Structure Workshop, we looked at how we could rationalise these layers. As faience is essentially a load-bearing material we wanted to see how we could make more of this property, taking inspiration from how it was done historically. So we stripped out the steel cage and paired it right back so that each block has only a small shelf bracket tying it back to the concrete frame. The blocks are arranged in a stretcher bond, like brickwork, with dowels connecting them and mortared joints. This allowed us to take advantage of faience’s loadbearing properties over a series of 3m high lifts. There is a bit of steel in there still, we couldn’t get away from that. Darwen and Szerelmy have supported us in discussing the design development and installation options from the early stages of the project. 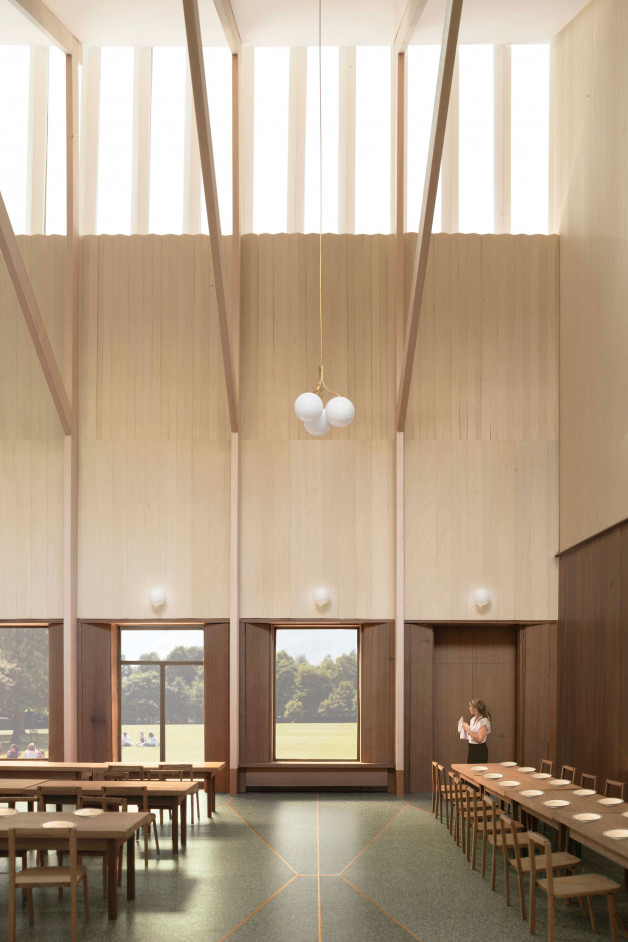 BC: A conversation that keeps coming up in our event series is how to make faience structural and move away from the material being a rain-screen cladding. But it must pose a building challenge. Is building with ceramic a completely different skill set?

FF: Through the direction we took the design, after we realised we didn’t want all these multiple layers of structure which was really inefficient and wasteful, we looked at installation of similar materials such as dressed stone, trying to tap into existing knowledge and installation skill sets available in similar areas. Despite this, faience remains an unusual material and not one for which there is a large pool of experienced installers.

BC: Is faience easily transferable to other projects?

FF: A lot of care and craft goes into production of the material and perhaps its increased use is representative of general increase in interest about how and where things are made and the evidence of the human hand in making. Due to its visual qualities, faience will always provide a special moment, be it big or small, in a building where budget allows. Its use feels particularly successful in historic contexts where its addition will be clearly new but carry with it a richness and traditional quality that allows it to sit comfortably – it is modern but respectful.

The New Dining Hall for Homerton College Cambridge is due to break ground in early 2020, with a projected finish date in 2021. The project architect is Eleanor Hedley. 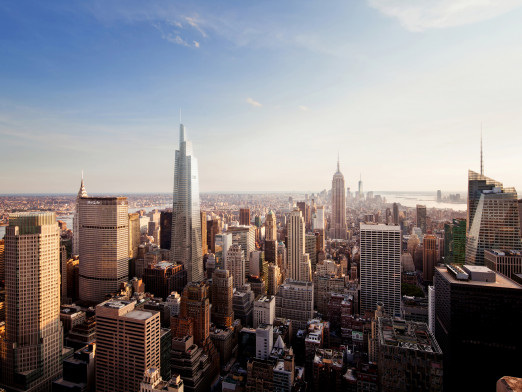 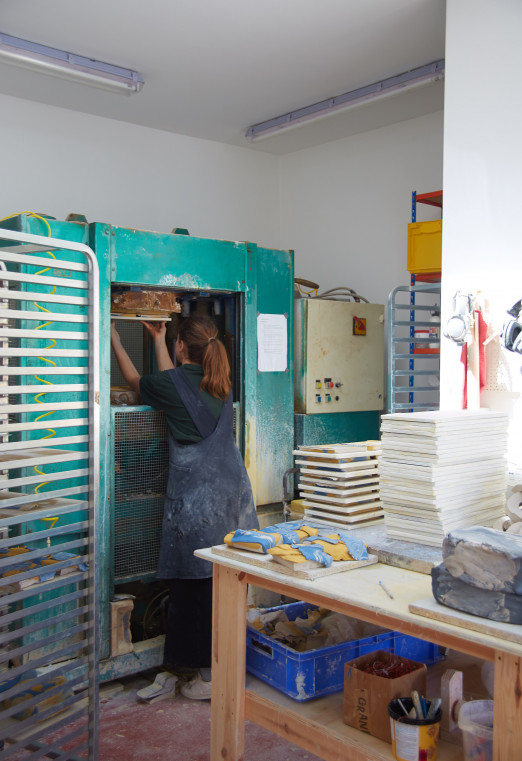 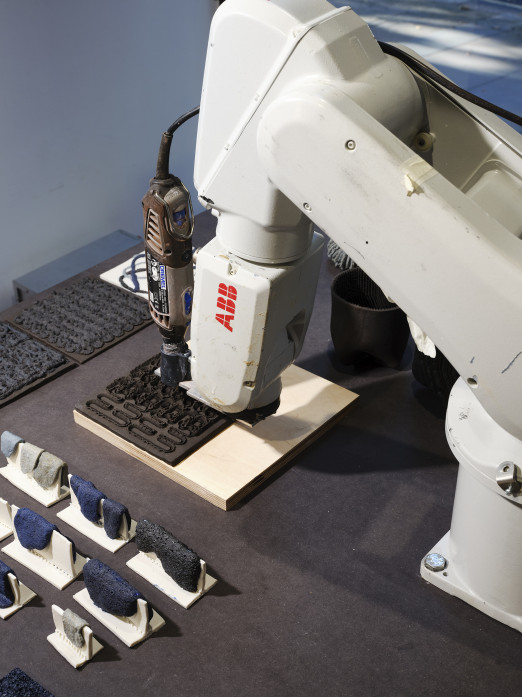 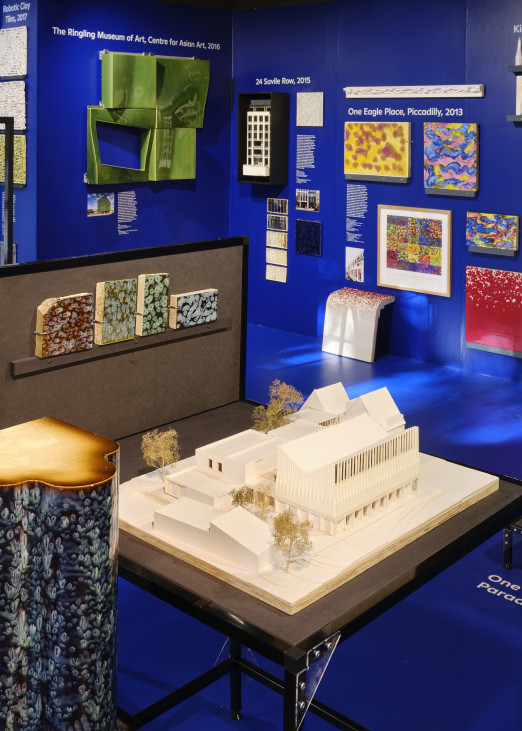