Stage is set for secondary glazing to soundproof historic theatre 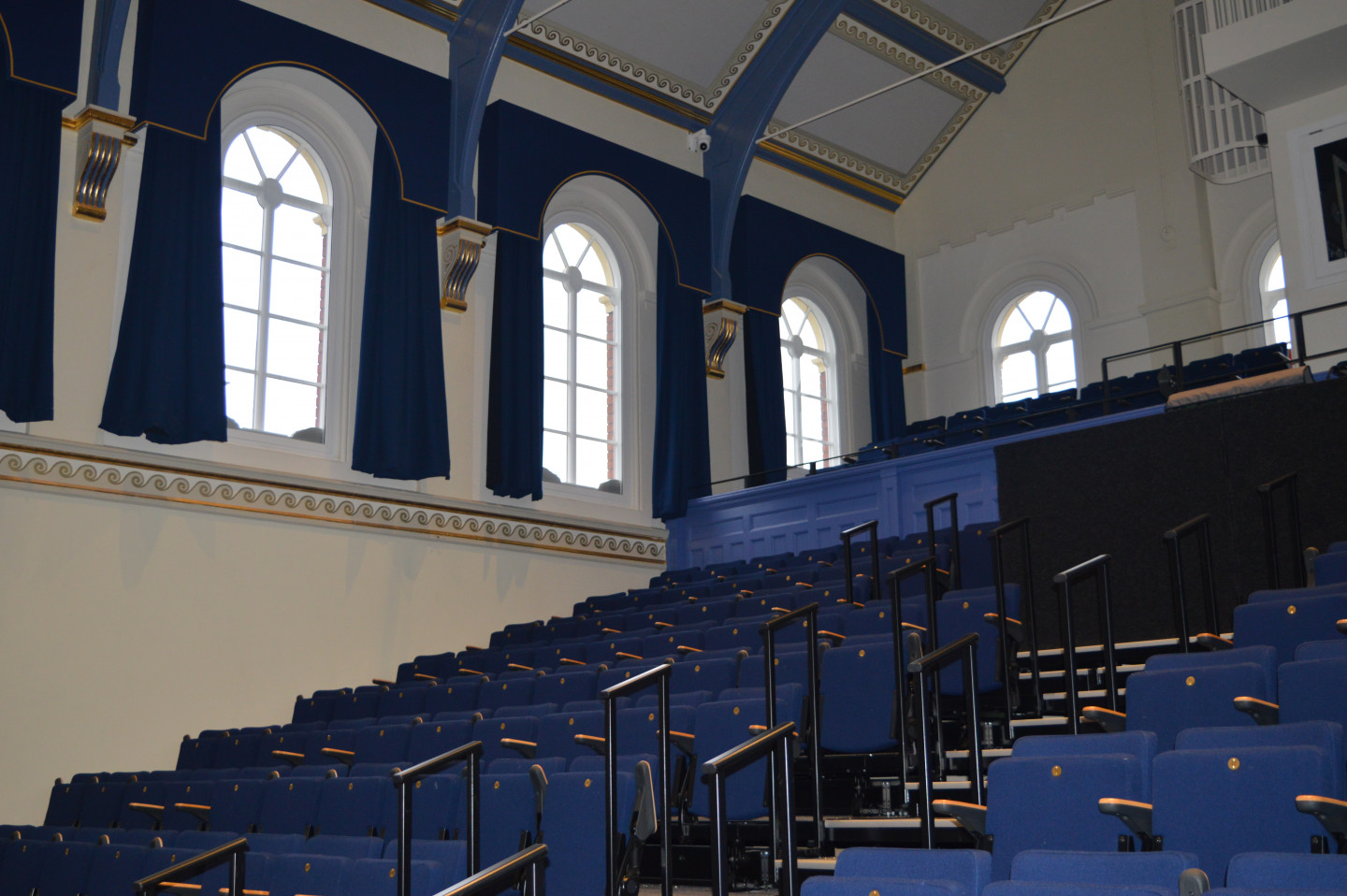 Stage is set for secondary glazing to soundproof historic theatre

Discussions about the construction of Tamworth Assembly Rooms began in 1887 to mark the Golden Jubilee of Queen Victoria and it was subsequently opened in 1889. Since then the theatre has been a continuous hub of entertainment. The Beatles famously performed there in 1963, just months before they were rocketed to stardom. After a long service the 130-year-old venue had fallen into a state of disrepair and finally closed its doors to the public in 2016.

A substantial refurbishment was needed which came in the form of a multi-million-pound scheme to create a new Enterprise Quarter in the heart of Tamworth. The ambitious renovation was funded by the Staffordshire and Stoke on Trent LEP Single Local Growth Fund, the Heritage Lottery Fund, Arts Council England and the remainder from Staffordshire County Council and Tamworth Borough Council.

Main contractor, Glasgow-based Novus Property Solutions was tasked with the extensive rebuilding of the renowned venue’s internal layout, to create an impressive multipurpose building with more space that can be used for a variety of functions. The theatre was substantially refurbished and updated with its ornate historic features conserved.

The Grade II Listed Victorian building had suppressed many secrets of its poor condition resulting in additional works being unearthed and undertaken. Much work was required to rejuvenate the large curved casement windows in the main theatre area. These original windows had been boarded up since the early 1970s, meaning that no natural light had entered the main auditorium area for over 40 years. They were originally blocked up to create black-out for theatre productions, and to improve acoustic controls. Directly outside the front of the theatre is a busy car park and a bus terminal, both of which generate high noise levels.

A solution was required to insulate the single glazed original arched casement windows, whilst ensuring that they could function properly and look aesthetically pleasing. The Heritage Lottery funding stipulated and would only be granted on the proviso that the additional casement windows were openable.
Existing single pane primary windows with a performance as low as -20dB are not fit for purpose in buildings located next to busy roads where ambient noise levels can range between 75 – 95dB. As well as providing a more effective sound barrier than double glazing, acoustic secondary glazing is generally the only accepted solution for Listed buildings and those in conservation areas. Selectaglaze has designed a wide range of products which blend with historic environments whilst providing significant noise attenuation. If set 100mm apart from the existing window, it will reduce noise levels by 45 decibels with higher figures achieved using specialist glass.

Following a productive set of consultations, the Series 41 side hung casement was specified to 17 of the windows in the main theatre as it is a heavy-duty framing system ideal for large windows. With the openings measuring around 2.5m h x 1m w a robust solution was needed. One of the windows needed clearance to open over the side of the balcony seating platform; therefore, it was decided to split the opening by transom coupling a Series 43 demountable fixed light and Series 41 unit. The specification of this style offers full access to the outer window and is unobtrusive so as not to impede the view or introduce any new sightlines.

Prior to the installation of the secondary glazing, the primary windows were overhauled. This included the stripping of the over boarding so the windows could be investigated, replacing any rotten joinery and full redecoration.

Once all the windows were repaired, the timber sub frames were fixed back to the brick masonry without disturbing or damaging the existing lime plaster. These were specially designed with a 300mm wide flat surface at the centre of the soffit to allow for the positioning of motorised blinds which were to be used to black-out the theatre during performances.

The installation of the 19 secondary glazed units, with 6.4mm laminate glass was no easy task. The clerestory windows were approximately 4m from the ground and the units each weighed 93kg, so scaffolding had to be erected to facilitate the safe and secure installation.

“This theatre has been at the heart of the Tamworth community for generations and we wanted to make sure it stays that way. Not only has it been lovingly restored to its full Victorian glory, it has been significantly extended and modernised throughout and can now be used for a variety of purposes. With its new café, meeting and conference spaces and information centre, visitors can be welcomed through the doors during the day, as well as the evenings. Bringing light back into the auditorium was a key part of that and has transformed the look and feel of the theatre. We have an impressive and varied programme of entertainment, with some top name performers, to welcome audiences back to a Tamworth Assembly Rooms which is bigger and better than ever.” Comments Mr Jody Ross, Operations Officer.

There is now a more comprehensive program of entertainment to welcome audiences and performers back through the doors of Tamworth Assembly Rooms. The much-loved theatre can now embark on a new chapter in its history having sympathetically enhanced and restored the historic features which make it such a special building. 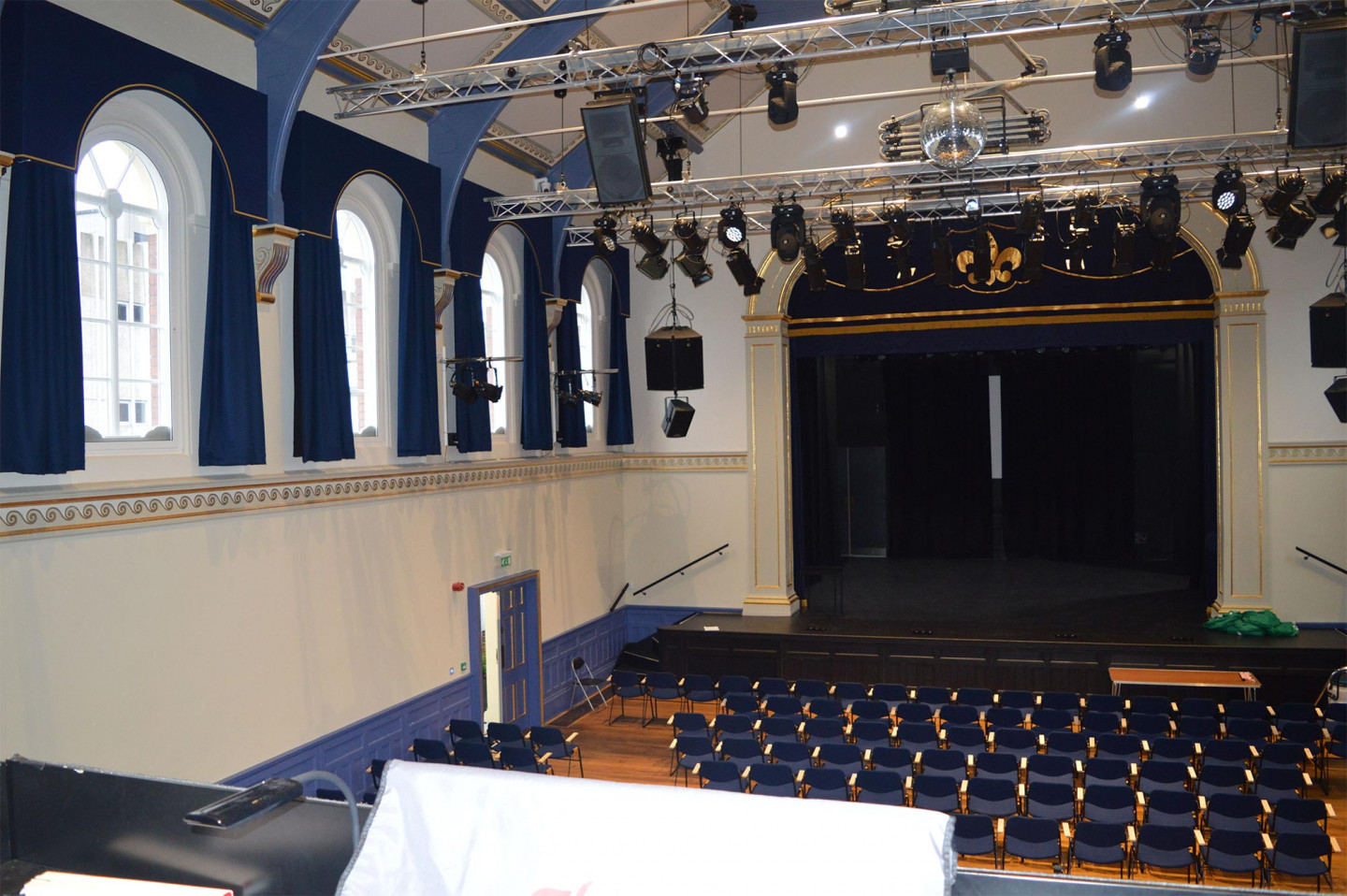 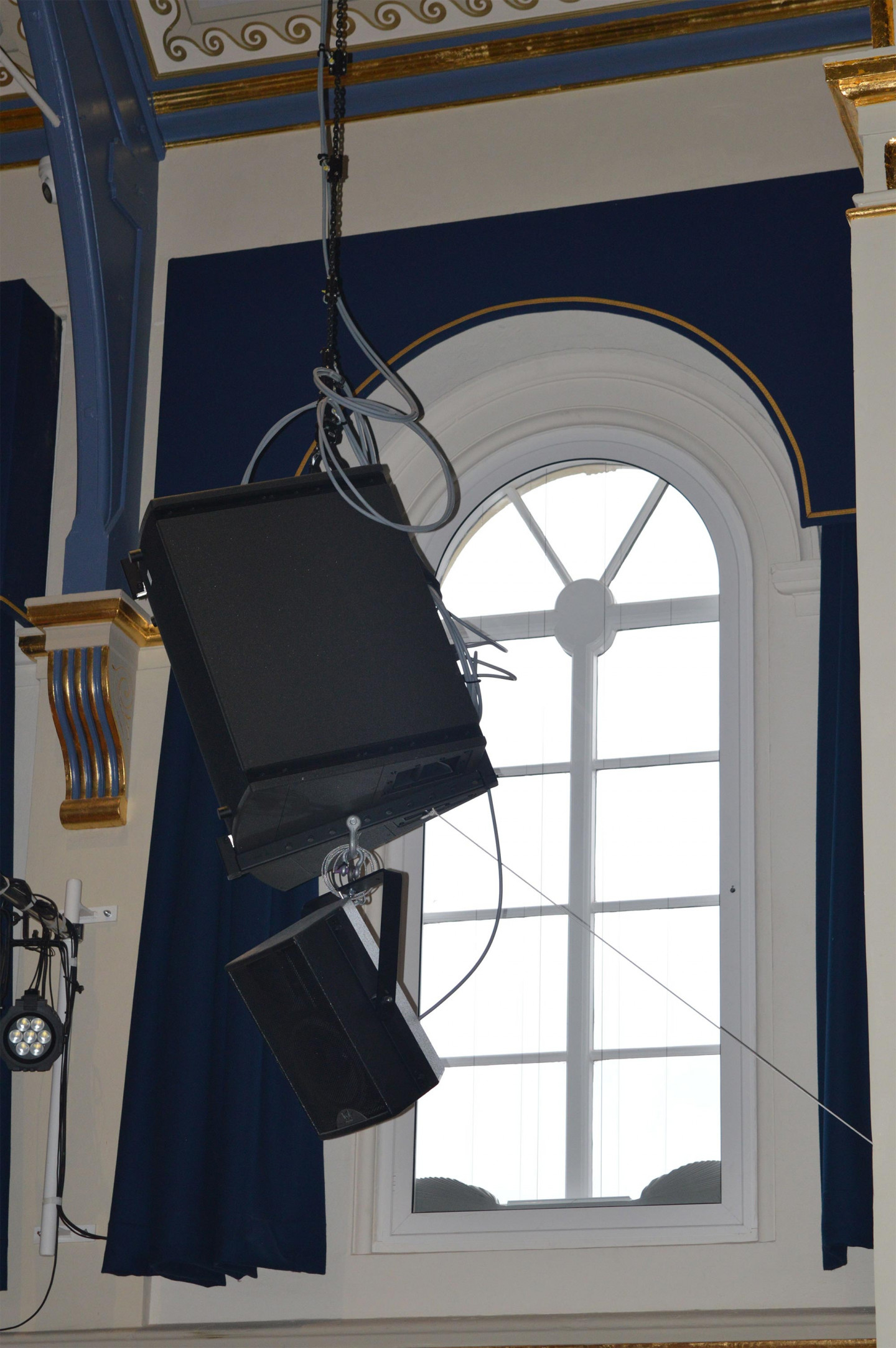 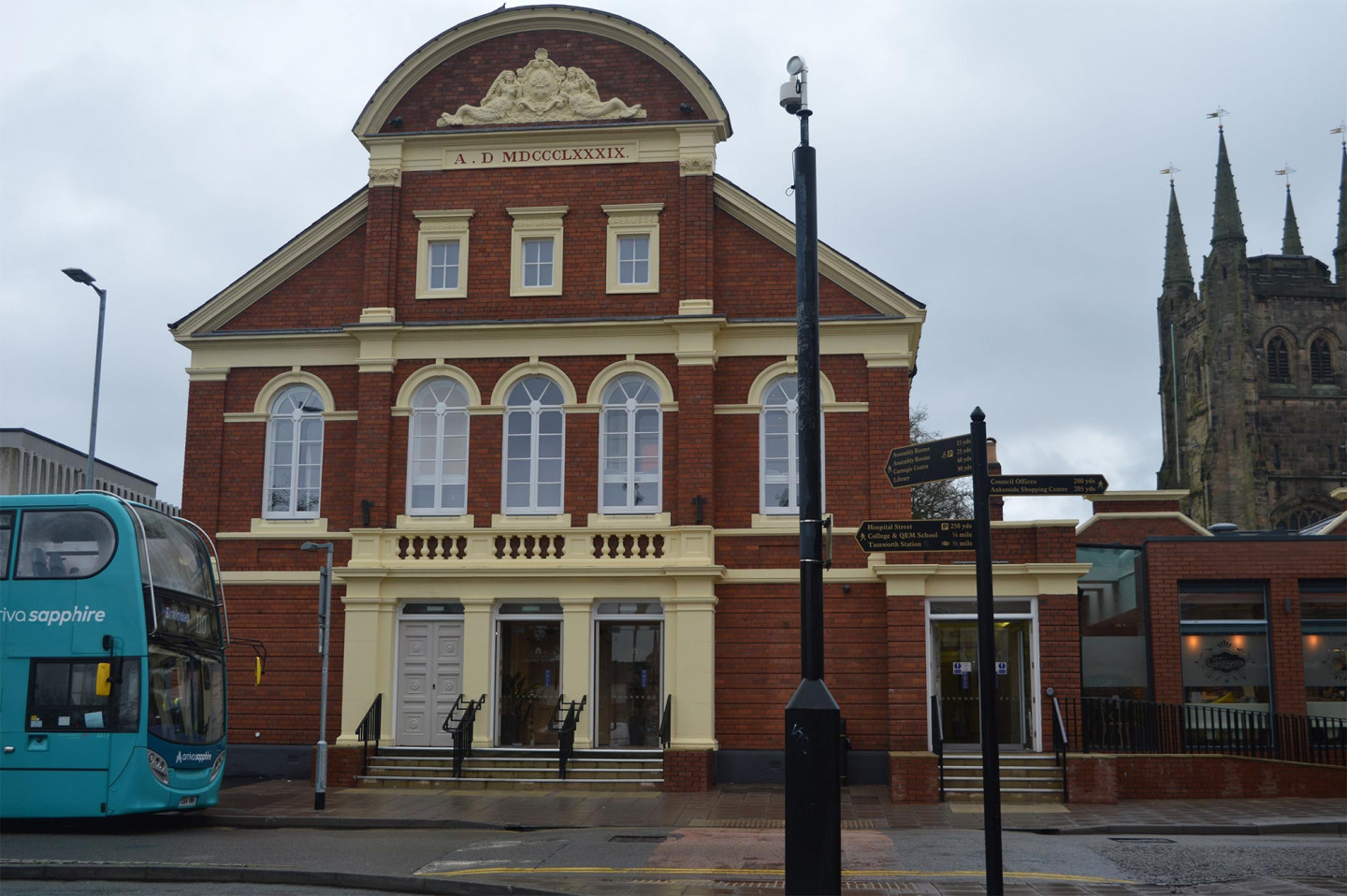 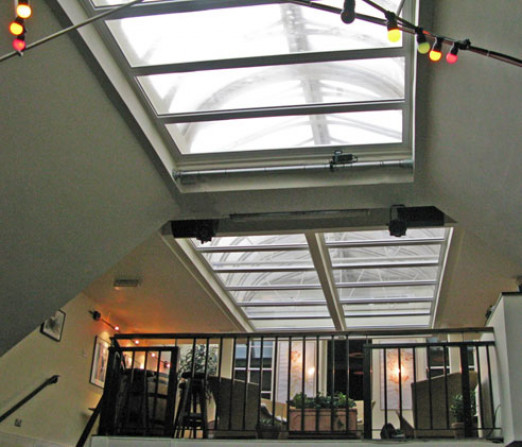