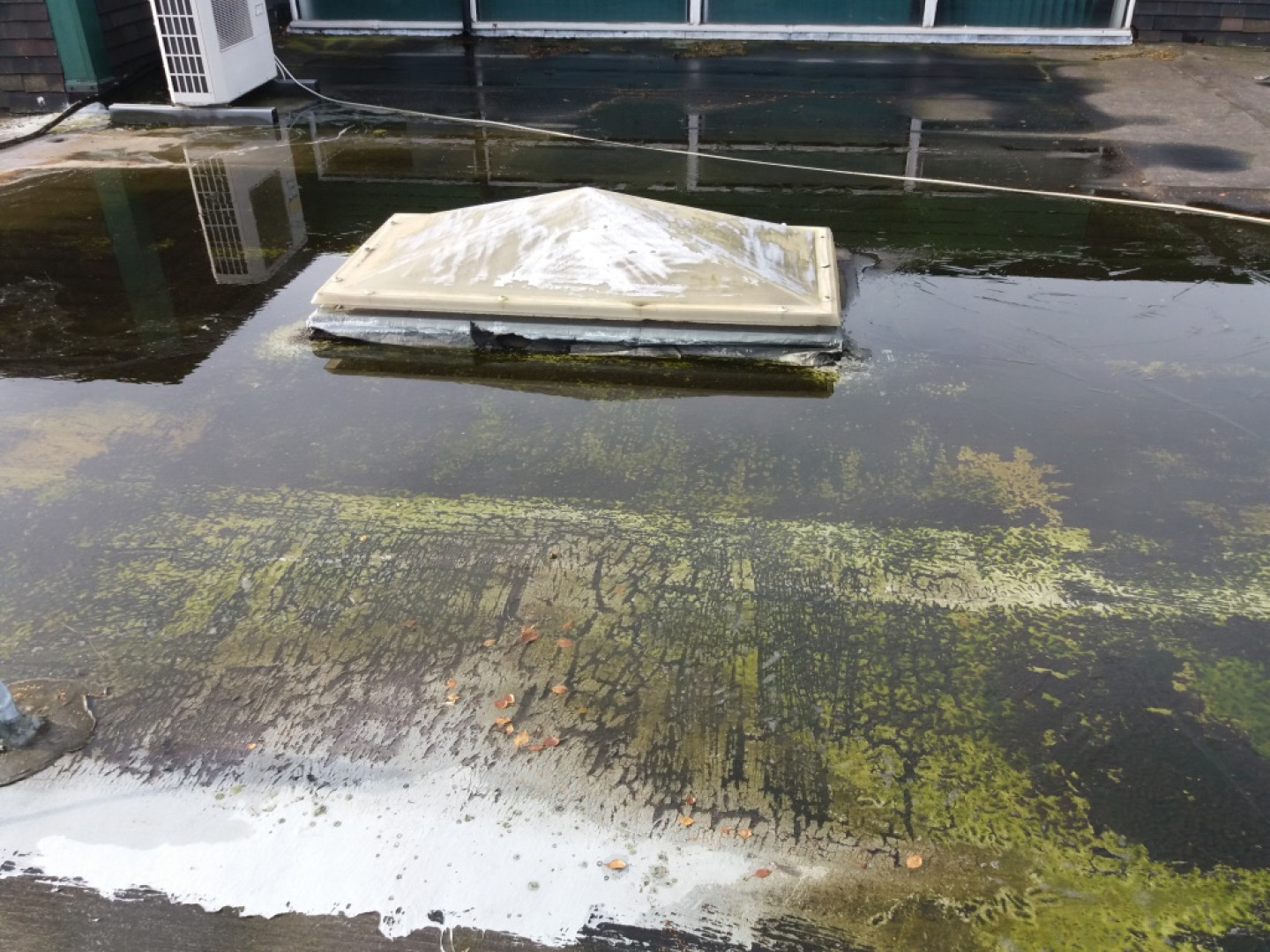 If you look after a building constructed in the latter half of the 20th Century it probably has flat roofs. You may also have trouble with flat roof leaks. This article looks at the most common causes of flat roof failure so that you can look out for them and advises on what you can do to prevent failure in all your flat roofs.

1. Age – the most common cause of flat roof leaks
All roofing materials have a limited lifespan. However, as technology has advanced over recent decades, newer systems were introduced which have a greater longevity than systems of the past. Your flat roof may simply be leaking because it has reached the end of its natural life.

• Many 1960s built flat roofs were built with a “pour and roll” 1e1b system, consisting simply of rag fibres covered in bitumen;
• In the 1970s and 80 technology moved on towards a polyester based HT ranges of membranes known as 5e’s and 5b’s – many of which would have had a 20 year lifespan;
• Then in the 1990s it became commonplace to use elastomeric membranes. These now have a life expectancy of 30 years or more – over three times longer than the 1960s membranes.

If your flat roofs were built in the 1960s or even in the 1980s, there is a very good chance that the membranes will be well past their sell by date. For example, hundreds of primary and secondary schools will have been built with these membranes and many will have been repaired in various ways.

2. Temperature Changes and Solar Gain
During the latter part of the 20th century, insulation values in flat roofing have increased faster than the membrane technology, as attempts are made to reduce energy loss from buildings. As a result, simple oxidised bitumen was being used to stick membranes onto relatively highly insulated roofs.

When dried, oxidised bitumen becomes rigid and is not able to expand and contract with temperature changes. Solar gain can cause the membrane to heat up, and insulation underneath can prevent heat from conducting away from the membrane. As a result, oxidised membrane can crack, blister and fail, causing leaks.

Newer membranes such as our SIGnature range are engineered to cope with these temperature changes in a way that traditional bituminous systems cannot.

3. Movement in the Structure
All buildings expand and contract due to heat, and good design will take this into account. Many traditional membrane systems were not developed to take the degree of movement that can be experienced on a flat roof. If your flat roof was designed without expansion joints this could lead to the early failure of the membranes.

Modern flat roofs are designed to take movement into account, but your flat roofs may not have had the benefit of decades of flat roofing development.

4. Blisters
Blisters are generally a sign of water inside the system. If water has entered the roof structure, the higher internal temperature can turn it into water vapour which needs to escape upwards, producing pressure which causes blisters.

There are several ways that water can get into your roof:
• If the insulation or timber is damp when installed.
• If the contractors haven’t dried the roof correctly after a period of rain during the installation.
• Failures in the membrane, particularly at details and laps (where sections of membrane are joined).
• Punctures and penetrations if these are not correctly detailed and installed, and
• Interstitial condensation.

A blister produces a weak point in the roof membrane, and the membrane may fail because it isn’t design to expand and stretch that much. The blister may also pull on nearby laps (joins) and cause them to fail.

Delamination in a bituminous membrane generally happens either:
• when the membranes haven’t been heated enough when installed, or
• through water getting between the layers of membrane.

Interstitial condensation can produce a ‘dew point’ between membrane layers (a point where the temperature drops sufficiently so that any water vapour will condense into liquid). Then the liquid water cannot escape and builds up causing the layers to separate.

• Overspanning of decks – where the roof deck is spanning between rafters (beams) which are too far apart. An overspanned deck is not structurally sound so it will move more. There is also a safety issue – people will be at risk if they go on roof which cannot take their weight.
• Inadequate falls – if the roof pitch is too shallow this can create excessive ponding of water.
• Failure to calculate condensation risks – A major cause of interstitial condensation is the failure to calculate whether it is a risk in the first place.
• Shallow upstands – upstand heights should be 150mm, otherwise during a heavy rain shower water can overflow the upstand and get into the roof, and
• Poor detailing around penetrations such as rooflights and soil vent pipes. These are weak points in a roof and need to be robustly detailed.

Make sure your roof is designed by an experience roofing specialist that has their own Professional Indemnity Insurance to cover the design.

7. Poor Workmanship
Finally, it is essential to remember that roof installation is a professional skill. Any system can be designed expertly; but if not correctly installed it will fail.

Using qualified, accredited contractors is essential to prevent flat roof failure. Cheap labour with poor skills will make mistakes. A qualified and accredited contractor will be competent, experienced and will also be willing to discuss any issues that with the project manager and designer rather than be tempted to find a workaround on their own.

It is also important to ensure that corners are not cut when installing a roof, either for expediency or cost savings. An accredited professional contractor will not cut corners.

Why Flat Roofs Leak: In Summary
Flat roofs leak for a number of reasons, and here are some of the most common.
• They have reached the end of their natural life;
• Temperature changes in traditional systems;
• Lack of expansion joints or design for movement;
• Blisters due to moisture trapped in the system;
• Delamination of the membrane.
• Poor design and detailing;
• Poor workmanship.

Many flat roofs designed and constructed towards of the end of the 20th Century will have reached the end of their natural life. It is essential that if a replacement roof is not to fail, it should be designed by an experienced roofing specialist using modern engineered materials and installed by an accredited contractor.