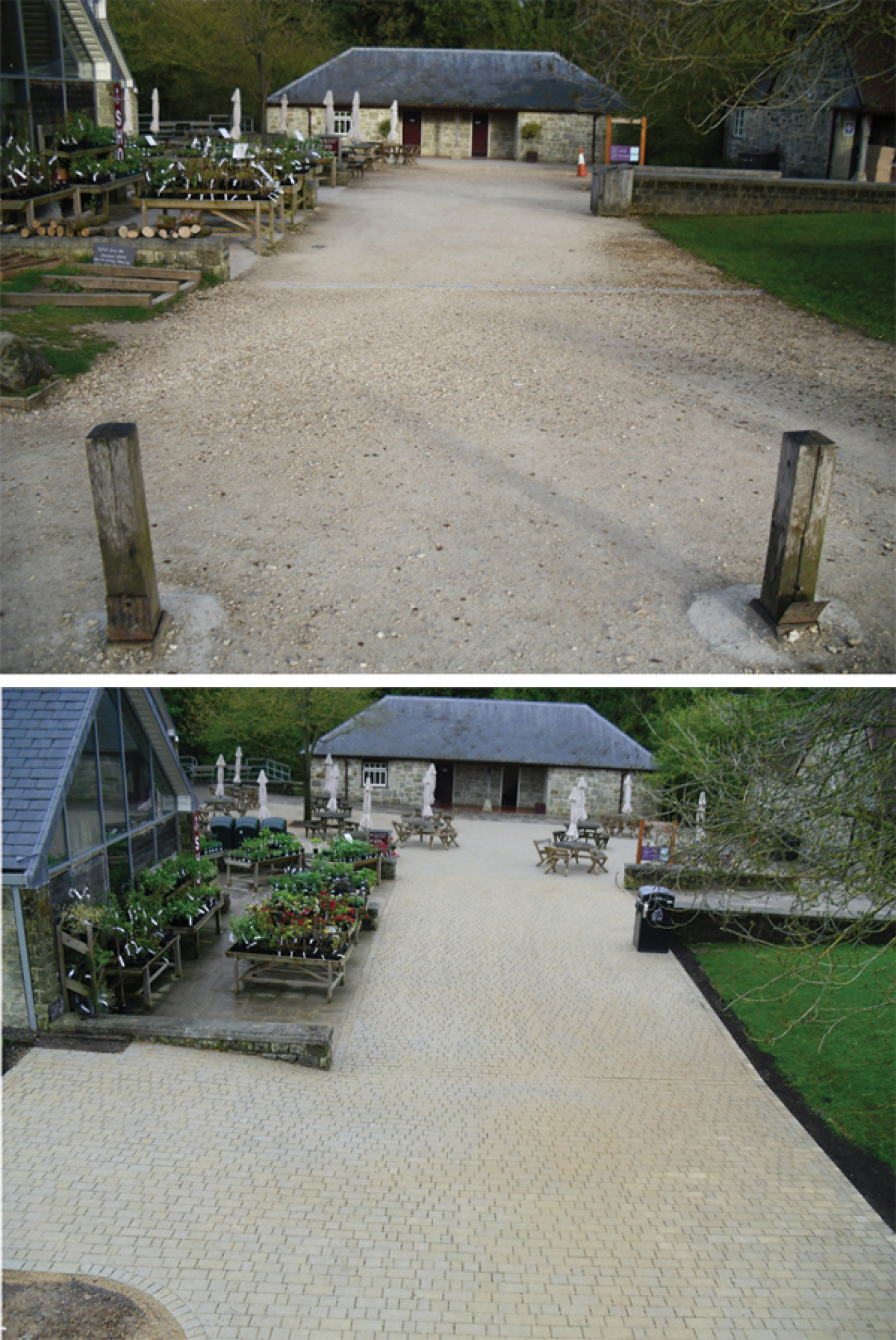 Hanson Formpave has supplied over 1000m2 of its EcoGranite Aquasett paving to the National Trust Stourhead estate; a Palladian mansion set within 2,650-acres of parkland, in Wiltshire.  Combining the environmental credentials of the EcoGranite paver, containing upto 77% recycled content, with the distinctive benefits of the ‘original’ SUDS and permeable paving system, AquaflowTM, the paving has been installed in a large visitor reception area, as well as the courtyard of the Spread Eagle Inn.

Working in line with the National Trust’s “Sustainable Procurement’ process, appointed landscape designer, Nicholas Pearson Associates, recommended the specification of Hanson Formpave’s EcoGranite Aquasett.  National Trust, project manager for Stourhead, Karl Papierz, said: “The National Trust has a remit to look at all aspects of the as-built environment when maintaining or improving its current building stock.  It looks at all options when procuring manufactured items and encourages its suppliers and partners to uphold its sustainability ethos, offering the ‘best price’ but at the same time minimising the impact on the environment.”

“The current surface, partially-bound gravel, presented all sorts of problems throughout the year – from dust to mud!  This not only impacted visitor enjoyment but also impaired wheelchair and pushchair access through and across the site.  We needed a hard surfacing solution that was self-draining, accessible and aesthetically pleasing.”

The Hanson Formpave design team had to combat a number of environmental issues in the visitor reception area, including flooding, which was causing the existing gravel and topsoil surface to be washed away, and the potential trip hazards of raised tree roots.  “The site had a number of sloping areas which meant that during heavy rainfall pools would form,” said John Lloyd, Hanson Formpave’s head of design.  “The ground conditions were of a good standard so this meant that we were able to design the system to infiltrate into the ground but first, we had to ensure that the surface was levelled out so that the sub-formation was also level.  This allowed us to maximise the ground storage in all the right places whilst minimising storage at the foot of the slope where the storage capacity is naturally shallower and there is a greater tendency toward surface water.  By designing and installing in this way we were able to manage and eradicate flooding and pooling across the entire surface.”

Following the success of the first installation, John and his team turned their attention to the courtyard of the ‘Spread Eagle’, an 18th century Inn in the heart of the village of Stourton, part of the Stourhead estate.  “We faced the same challenges on this site with the addition of a number of well-established trees,” continued John.  “Trees have a ‘no-dig’ zone that protect the root ball, paving directly up to the trunk would not only starve the roots of oxygen and water but would also cause the surfacing to become uneven and hazardous.  So we designed the scheme leaving a circle of exposed earth around the base of each tree.  The added bonus of using permeable paving is that the blocks allow both oxygen and water to infiltrate down, and so allow for roots to be nourished regardless of the paving!”

Visitors to the Spread Eagle Inn pass over an expanse of original 18th century cobbles on their way into the public house, and so it was imperative that these were preserved and worked into the design.  It was down to Rob Skidmore of Back2Front Landscapes, the project contractor, to ensure that the EcoGranite edging was seamless to the cobbles.  EcoGranite has a tonal empathy to heritage and restoration schemes, and is ideal for projects where new meets old, and this was no exception; the paving was selected in ‘Victoria’, a warm, rustic cream colour, ideal for the chalky tones of the downs and the red brick of the Spread Eagle Inn.

This was the first time that both Hanson Formpave and Back2Front landscapes had worked with the National Trust, “…and we are over the moon with the results,” said Karl.  “The Trust, as well as its partners and stakeholders have a vested interest in the entrance and courtyard areas as they have a direct impact on a number of businesses.  All parties are extremely happy with the appearance and performance of the paving; it has eliminated the risk of potential flooding into the shops and Inns, and has facilitated ease of movement around Stourhead.  The rainwater run-off onto public highways has also been eradicated which in turn has eased erosion of the adjoining gravel pathways.”

“The contractors, Back2Front Landscapes were a joy to work with, having been recommended to us by Hanson Formpave.  They were a diligent, hardworking team and no request was too much trouble.  They interacted with the public, advising on processes and products whilst staying 100% aware of health and safety.”

Hanson Formpave is a leading UK manufacturer and supplier of SUDS and water harvesting systems using specialist concrete paving.  Having pioneered what is now commonly referred to as sustainable urban drainage systems (SUDS), utilising permeable paving, the company has become the market leader is this field with the Aquaflow® permeable paving system winning the Queen’s Award for Enterprise: Innovation.