Coffee with curves; Mizzi Studio's kiosks for the Royal Parks 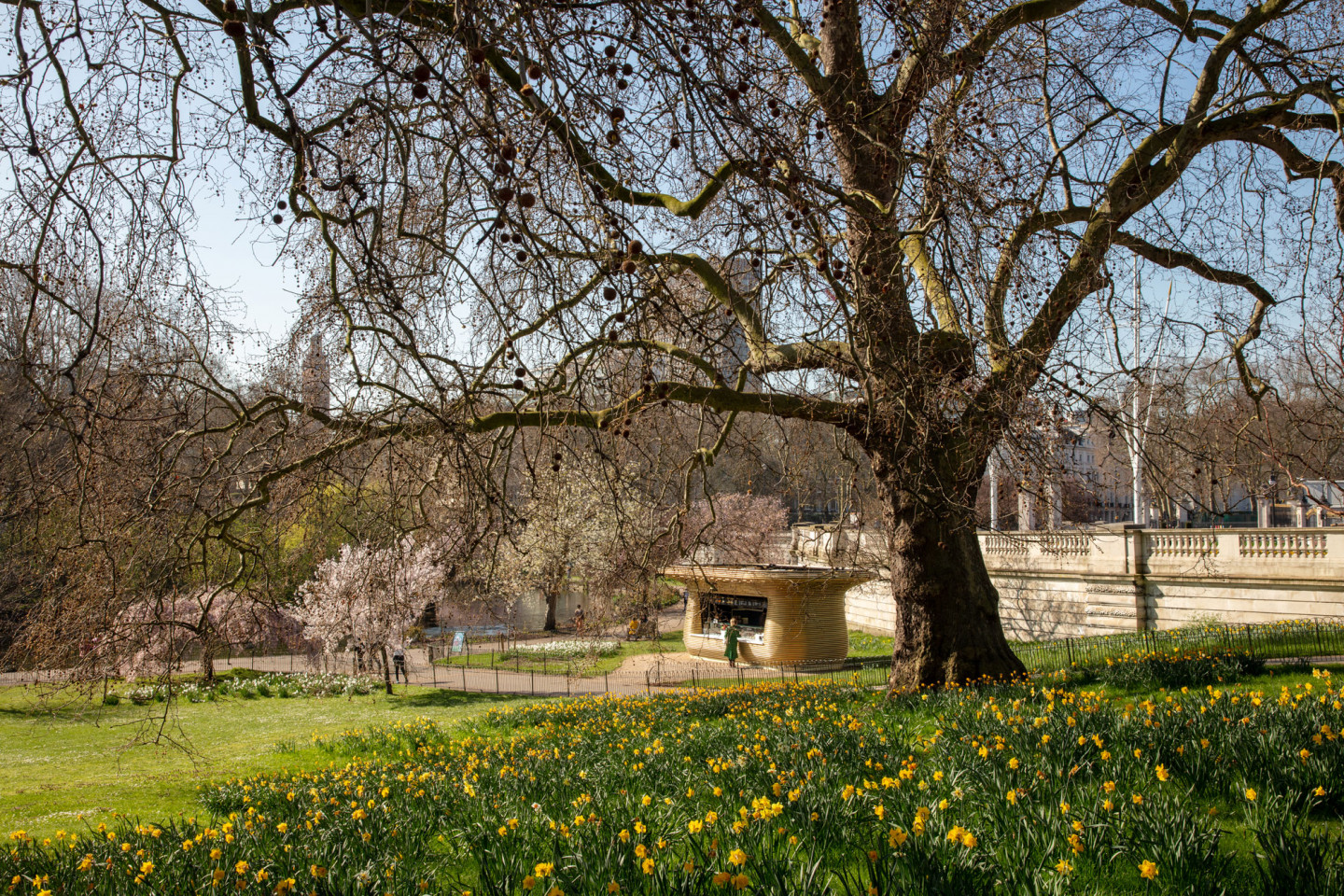 Coffee with curves; Mizzi Studio's kiosks for the Royal Parks

Jonathan Mizzi speaks to Vanessa Norwood about the redemptive power of nature, mixing craft with technology and why sharp angles make us anxious.

Most practices would be daunted by designing structures for the Grade 1 listed Royal Parks but Mizzi Studio, led by Jonathan Mizzi, were in their element. The practice is building a reputation for considered use of materials and their mix of craft and technology. They responded to the brief for nine kiosks with organic, curved forms that sit so comfortably in the landscape, it is easy to believe they were always there. ‘Very little in nature is linear, everything has been shaped by the elements. Architecture should be soft because that is how our natural world predominantly is', says Jonathan Mizzi, noting that neuroscience suggests that hard edges provoke anxiety. There is nothing anxiety inducing in the satisfyingly sculptural forms of the kiosks. The curved oak facades illustrate the practice’s commitment to a return to craft as a means to bring a human element to design.  Won in a tender with family run café and restaurant Colicci, the practice had an exacting brief from The Royal Parks - the charitable organisation with the mission to upkeep the parks’ Grade 1 listed landscapes - asking for a family fleet of kiosks that echoed their sustainability leadership and ethos. The parks play an important role in enriching the lives of Londoners and visitors to the city, and during the pandemic provided vital places of respite. 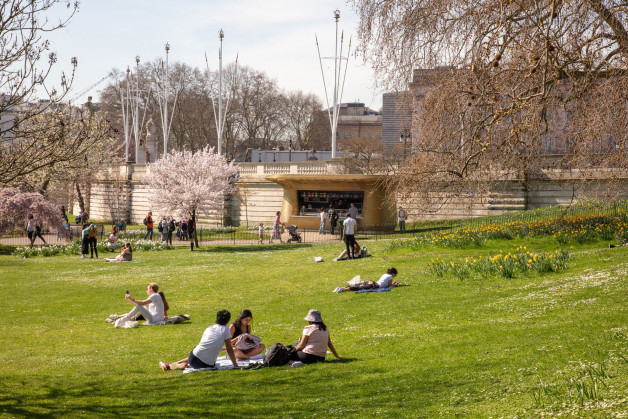 Jonathan and his family spent most of lockdown in Malta, the country of his birth. The tiny island has been shaped by many cultural influences due to its central Mediterranean location giving it strategic importance as a naval base. The practice has several projects underway in Malta, including a redesign of Malta’s iconic traditional art deco buses.

Mizzi Studio were only a year old when they got their first commission from the Colicci family and the relationship has worked well; founded on a mutual appreciation of quality and attention to detail. The kiosks, although possibly the smallest pieces of architecture, had an important role to play in the parks as refreshments zones and wayfinders. The structures needed to sit comfortably within the landscape so the challenge became designing a beacon that was understated yet confident. 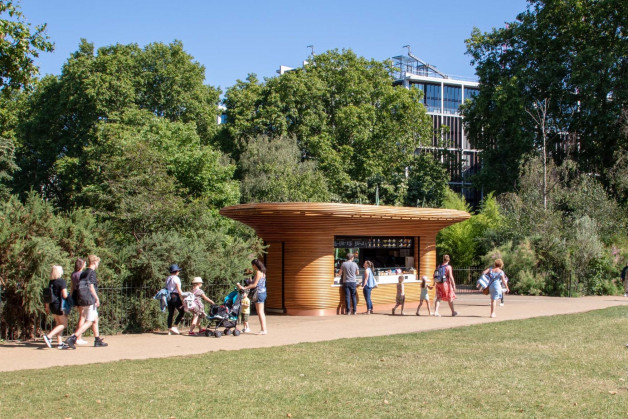 The practice collaborated with Tom Raffield, a designer and maker who is expert in the centuries old traditional craft of steam bending wood. A giant jig was used to form the curved oak. The studio picked up the nuances of each park to make each kiosk contextual. Jonathan says ‘we made a family of siblings with the same genetic make-up but with different personalities.’

For St James’s playground, the form became more hourglass and bulbous and the steam bent oak was fully rounded to create a friendly structure in reference to the proximity of a playground. The Green Park kiosk was designed to be more rigid with a straight single curve to lend formality. 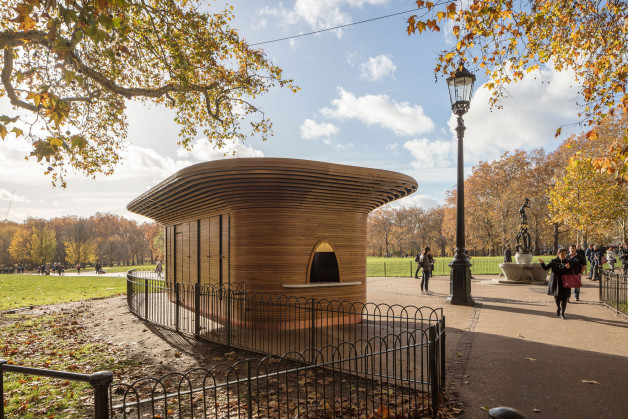 The Horseshoe Bend Kiosk is situated in view of Buckingham Palace in St James’s Park and is made from tubular brass in reference to the Queen Victoria Memorial. The practice wanted a more ‘regal option’ with some added bling and want the brass to age to add patina, but are keen to avoid the brown colour brass that is not cared for can turn. They have asked that the lustre is maintained with cleaning so that the property of the material isn’t lost. 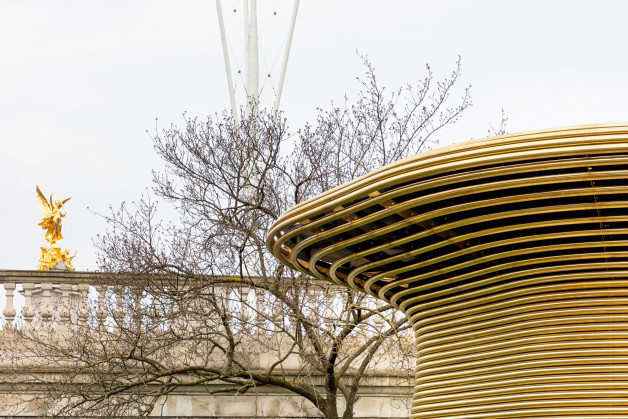 The Serpentine Coffee House came with a freer brief but needed to hold its own with the existing Serpentine architecture. Sited at the entrance to Hyde Park in front of the Serpentine Bridge, on the axis of the entrance to Kensington Gardens and Hyde Park, unlike the kiosks, the structure needed to house people. The studio designed the structure with the intention of greeting visitors with a smile, taking inspiration from Japanese pagodas that sit within a natural environment, eaves projecting in a fluid movement from the walls. The practice liken the finished café to the appearance of a stingray so that the entry has the sensation of being swallowed by a whale. 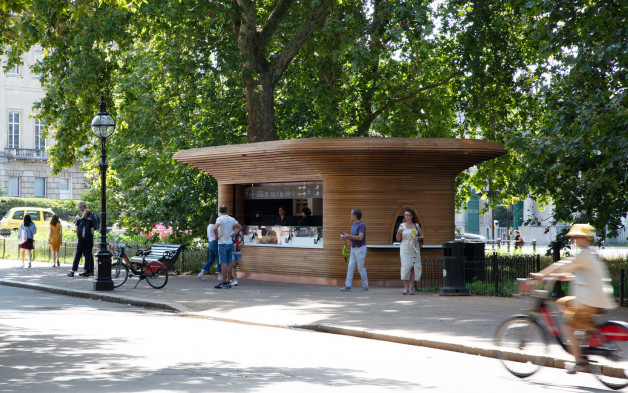 The Coffee House roof was engineered and fabricated in one giant piece made by MouldCAM in Poole, whose main business is making boats. A forty-metre-long gantry 3D printed the mould of the roof using carbon fibre and glass fibre in a process with no waste. Mizzi introduced a human element, so that the finished structure didn’t feel like a machined building, by spray painting the roof by hand in two tones, with a golden colour and a deeper brown overcoat. The roof was then sanded and hand patinated. On close inspection, the signs of peoples’ hands are visible. A short hop away from Hyde Park, Mizzi’s competition winning installation In Home away from Hive graces the exterior of the Science Museum as part of the South Kensington Design Trail. The practice worked alongside garden designers from the Royal Botanic Gardens, Kew to create the undulating timber structure. Built by Firecracker Works in sustainably sourced spruce ply, the nest-like timber lattice is layered with medicinal and pollinating plants. The installation is a joyous hive of discovery, education and biodiversity. Inside the structure, plants and daylight bring a moment of park life to an urban setting, creating a space of learning, and appreciation of the redemptive power of nature. 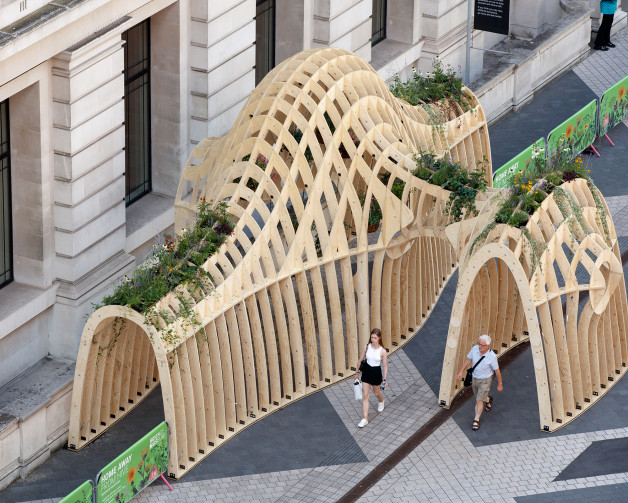 Mizzi are the perfect authors of such an endeavour; they are passionate about nature and the positive impact it has on our lives, and the warmth shines through their work.