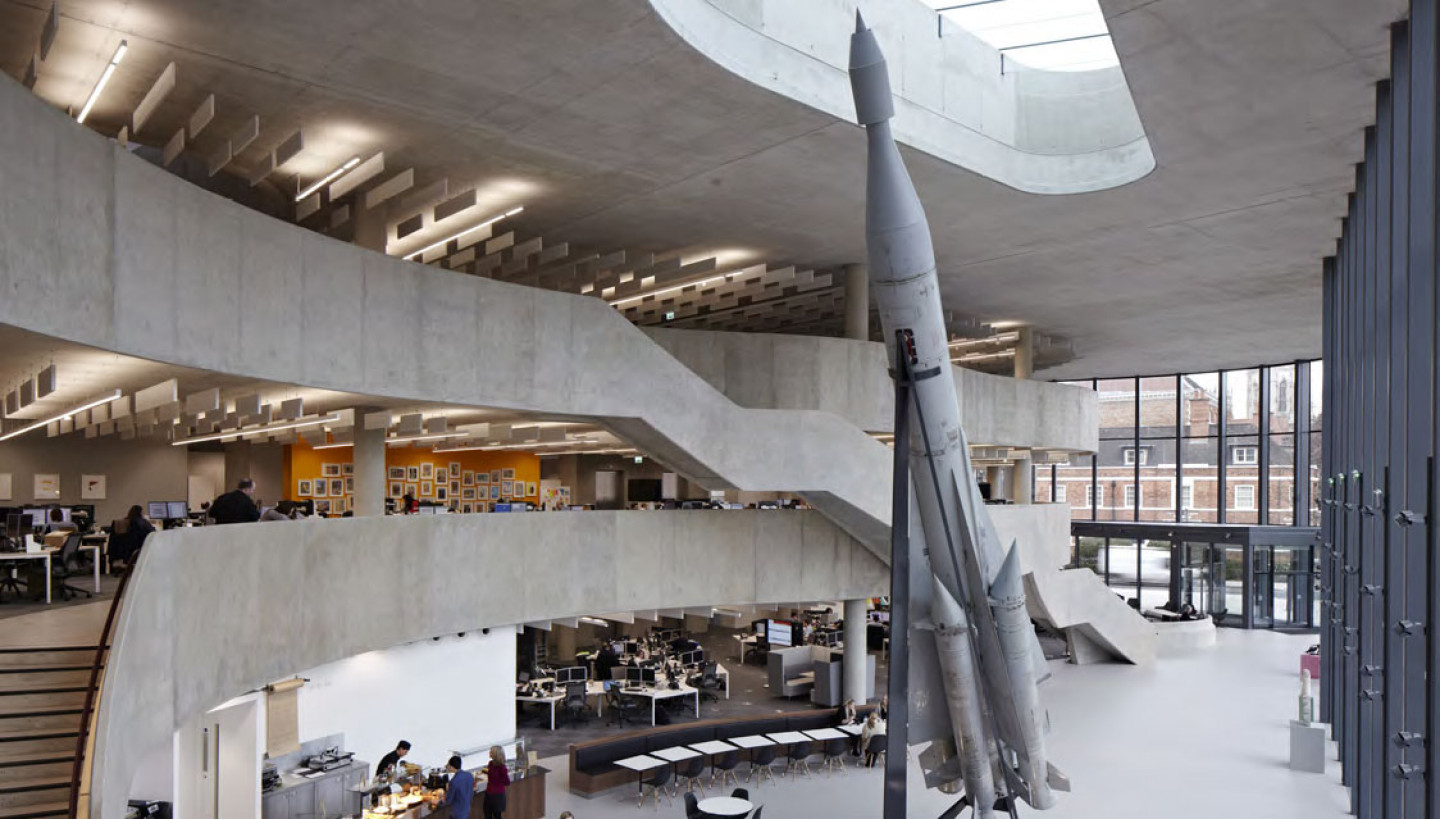 It takes a degree of confidence to specify an asstruck concrete interior to a prestige commercial project like the new £15m headquarters of insurer Hiscox in York. Nor are we talking here about super-smooth self-compacting mixes, or concrete born of specialist steel or fibreglass forms. This is standard, structural concrete poured into timber forms to create an architecturally stunning result.

It is unexpected too. Approaching the 6,300m2 building, close to York’s historic centre, the initial impressions are of glass, steel and brick. It is only once through the doors that it becomes obvious that this is a building that has been poured into existence from bottom to top. The floor is poured resin, the columns and soffits are exposed in-situ concrete, as are the slabs and balconies, visible from the triple-height entrance atrium. In addition, three spectacular concrete staircases wind their way through the atrium. Even the reception desk is a stylish sweep of the same in-situ concrete.

Project architect Jason Parker, of Make, explains that Hiscox initially took a little persuading to accept the concrete plan: “We took the client to other projects where concrete has been used in a similar way,” he says. “It was the best way to convey how the materiality of concrete can have a real warmth, and how we can live with the joint lines and embrace concrete’s natural variations. For Hiscox it is a means to express their brand values, which are all about integrity and honesty.”

“The finished concrete is not perfect and if you looked at bits in isolation you would think it wasn’t going to work. But when you look at it in its entirety – the way it works with the geometry, the fluidity of the lines and the way it informs the volumes – it works brilliantly as a material.”

Contractor BAM Construct started on site in August 2014 and among its first tasks was to deal with what is, for York, the almost inevitable issue of archaeology. Structural engineer Mark Fyson, from Arup, says: “The project has concrete piled foundations with pile caps and quite a substantial 450mm slab transfer structure which bridges over the site of a medieval graveyard.”

The building has a single core and 450mm in-situ concrete slabs forming the first and second floors, with a 750mm slab to the third floor. “This top slab stretches over the atrium which involves spans of 16m, whereas the lower floors have maximum spans of 10.5m,” says Fyson. “The 750mm thickness gives us the extra strength to do that, even though this slab also has a substantial skylight punched through it. Spanning over the atrium involved a monumental amount of propping to support the slab from ground level until it had cured.”

The roof terrace offers views across the city towards York Minster

The slabs are supported by in-situ concrete columns which, where visible, are circular and 600mm in diameter. Lighting and acoustic baffles are attached directly to the exposed soffits, which required early coordination of wiring. “In order for the conduits to be cast into the slabs correctly, the contractor had to work out with the client where the lighting had to be nine months in advance of the sparkies actually fitting it,” says Parker.

The structure was substantially complete before features such as the concrete reception desk and staircases were built. “It helped to have the props out of the way and a protected environment,” says Parker. Like the structure, the staircases were made from timber forms: “We thought about milled forms and glass fibre moulds for some of these elements but having everything made in the same way, with timber, by a bunch of highly skilled chippies, really works texturally. It helps to bring all the elements together and unify the aesthetic.”

Parker explains that the staircases were inspired in part by the meandering course traced by York’s city walls. They seem almost to defy gravity as they snake unsupported through the atrium area, but despite their impressive appearance their structure is relatively simple, as Fyson explains: “The vertical elements, or walls of the stairs, span from bottom to top, and the steps span side-to-side, so the whole staircase acts like a large U-beam. In fact, the staircases are reinforced quite lightly with small diameter bars at close centres to help control cracking and long-term shrinkage effects.”

The real structural gymnastics are in the stair landings. These are supported by 550mm concrete upstand beams that cantilever out from the slabs, hidden in the void beneath the raised floor.

The void also supports the building’s displacement ventilation system and this works in tandem with the considerable exposed thermal mass to minimise heating and cooling requirements. The use of the concrete as thermal mass is a major part of the building’s environmental strategy and has helped it to achieve a BREEAM rating of Very Good. Parker adds that the concrete contained 40% ground granulated blast-furnace slag (GGBS) as a cement replacement both to lower the building’s carbon footprint and to help create the required pale finish.

Dotted throughout the building are a number of large-scale artworks, most notably a decommissioned Soviet missile which seems poised to launch through the atrium skylight. In this context it is a handsome, sculptural object – at once elegantly inspiring and also an impressive grey chunk of heavy technology. It is testimony to Make’s vision that it seems to fit perfectly into the beautifully moulded environment around it. 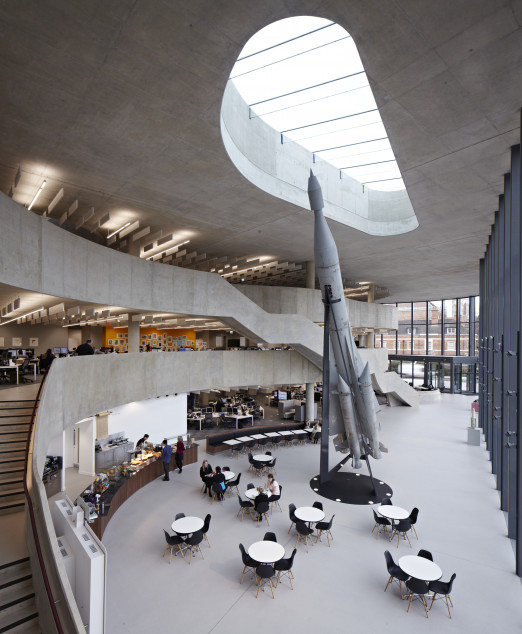