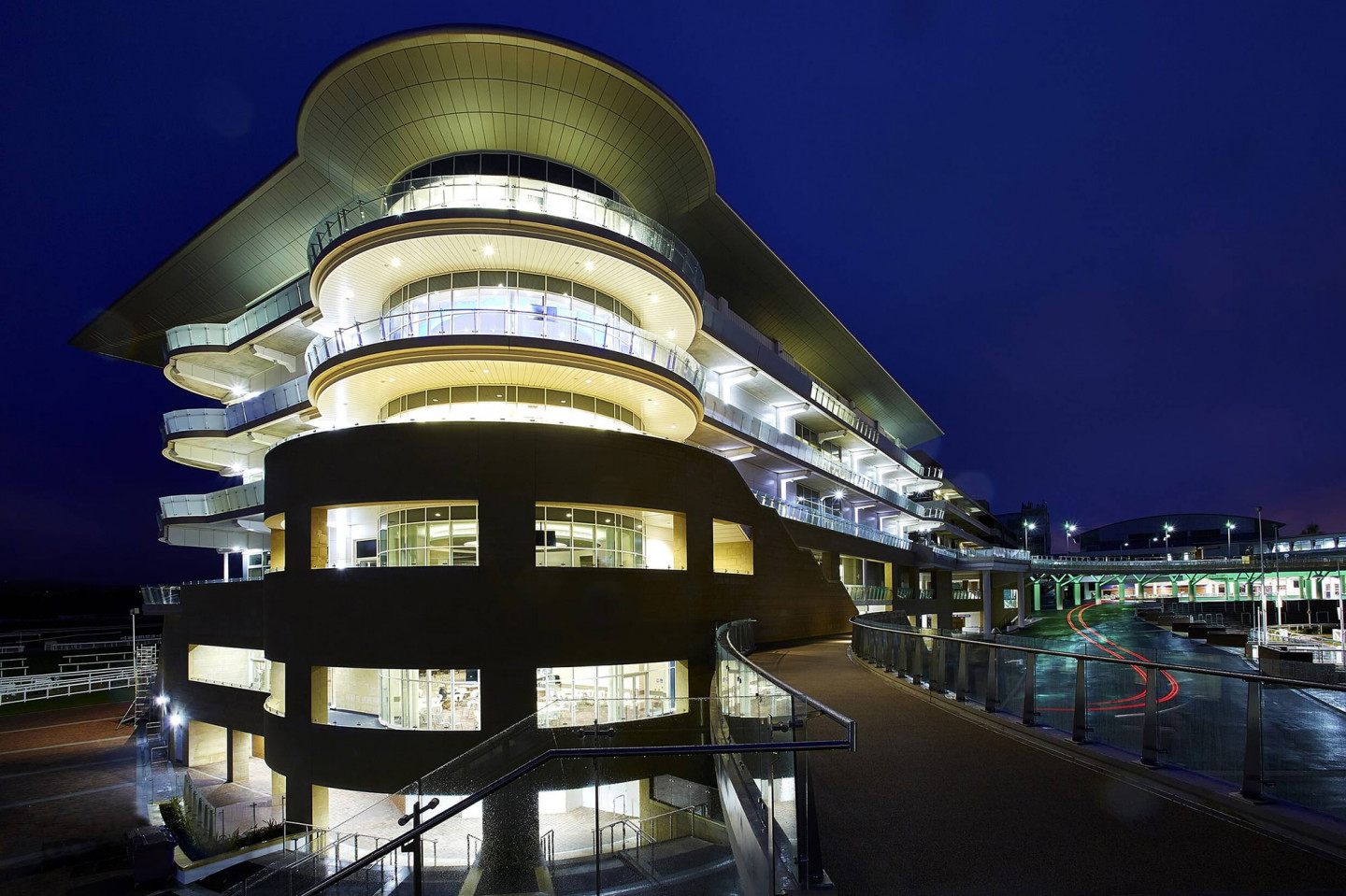 Cheltenham Racecourse is one of Britain’s best-known and most scenic racing venues, and the annual four-day Cheltenham Festival is one of the biggest dates on the sporting calendar.

To enhance racegoers’ experience at the venue and provide additional race-viewing and hospitality space, the course’s owner, The Jockey Club, decided to build a new five-storey, 6,500-capacity grandstand offering views over the track itself, as well as the winners’ enclosure and the spectacular Malvern Hills to the rear.

In order to maximise these views, full height glazing was specified for every floor of the grandstand, something that would also allow natural light to flood the interior spaces.

As with any largely glazed space, maintaining a comfortable climate all year round without excessive heating or air-conditioning was a priority. At the same time, the new building needed to continue the design aesthetics of the existing glazed stands at the track.

The main grandstand at the course was completed in 1979 and extended twice during the 1980s. The stand features green body-tinted Pilkington glass, housed within white aluminium frames - this has become a recognisable feature of the course, which the architect was keen to retain in the new grandstand.

Steve Berry, regional sales manager at Pilkington United Kingdom Limited, said: “When the other grandstands were built, in the absence of the advanced solar control coatings available today, body tinted glass was the leading option in terms of solar control technology. In fact, it still provides significant shading from the sun by reducing the amount of energy transmitted by more than a third. This helps to keep the interior cool during the warmer months.

“Matching the glazing in the new building to that in the existing structures was an important part of helping the new grandstand to blend in sensitively with the site, and so the architect opted for Pilkington Insulight™ units featuring green-tinted glass to match the units elsewhere at the racecourse.

The units do also benefit from a state-of-the-art low-emissivity soft coating though, in the form of Pilkington Optitherm™ on the inner pane, which in certain applications can deliver U-values as low as 1.0W/m2K while also maximising light transmission and minimising reflectance.”

Strength to stay the course

Because it was full height, and also being located on raised storeys directly above public areas, building regulations dictated a high level of structural strength for the glass. This was achieved by using toughened glass throughout the building, with double-thickness laminated panes on the outside.

Paul Seabright, operations director at Aluminium Sashes, said: “Cheltenham Racecourse is a cherished institution with a loyal clientele – many of whom have been attending events there for decades – so it’s vital that a development like this sits comfortably with the rest of the site. I think the glazing, being such a dominant feature, is a key part of achieving this.

“This is the latest project in our long-term relationship with Pilkington, and it has been a great help to have this level of continuity in such a high-profile project.”

A total of 1,900 sq m of glass was used, including some areas of opaque white glazing, for which white Pilkington Spandrel Glass screen-printed glazing was used.

The new grandstand is the final part of a £45million redevelopment of the course which has now opened to the public and saw its first Cheltenham Festival in March 2016.

The building contains a champagne bar, an owners and trainers bar, an exclusive season-ticket holders’ lounge named The Cotswold Club, the Royal Box, a number of private boxes and a fine-dining restaurant on the top floor.