Selectaglaze Ltd
selectaglaze.co.uk
2 Jun 2010
News
The UK has a rich and varied architectural history but regrettably many such buildings are eventually deemed surplus to requirement and allowed to fall into disrepair. Fortunately some are saved and restored through conversion to Museums, providing a vibrant view of history and becoming valuable cultural attractions.

Security of exhibits is an important consideration. Guidance is provided by The Council for Museums, Libraries and Archives and well protected windows are high on the list for compliance with the Government Indemnity Scheme.

As most museums are in traditional buildings that cannot alter or change windows Selectaglaze has developed a range of secure secondary units that have been rigorously tested against physical intrusion using the BS7950 standard and the Loss Prevention Standard LPS1175. They are also accredited to “Secured by Design”.

Three historic properties: a sewage treatment works and pumping station, a Town Hall and a private house have all recently been transformed into museums and each has benefited from Selectaglaze’s expertise.

Leighton House in London’s affluent Holland Park, was built between 1864 and 1879 for Frederic, Lord Leighton, the eminent classical painter and President of the Royal Academy of Art. By the time of his death in 1896, Lord Leighton’s home had become known as his “Private Palace of Art”, famous not only for its architectural and decorative character, but also for the range and quality of the fine and decorative art collected from around the world. Following Lord Leighton’s death, the house was opened as a museum and in 1925 was sold to the Royal Borough of Kensington, predominantly for use as a concert venue, with an extension added to provide additional gallery space. The building sustained bomb damage during WWII and underwent piecemeal repair and restoration over many years. About two years ago a decision was taken to restore the house to its former glory recreating the original appearance using old photographs and through the loan of many key paintings. As part of this restoration it was decided to improve the security of selected windows to “Secured by Design” standards by using secondary glazing. It was important to respect the sight lines of the traditional sash windows and each window has been treated with a single hinged casement close coupled and finished in matt black to match the existing paintwork. The inclusion of anti bandit glass and multi-point locking ensures discreet protection.

In 1850 North London saw a permanent Local Board of Health set up to combat the problem of sewer and persistent water contamination. This eventually resulted in the establishment of a sewage treatment works and pumping station, which remained in operation until the mid 1960’s.

The pumping house, which contains what is believed to be the last surviving eight-column steam Beam Pumping Engine in its original location, saw continuous duty from 1888 to 1905. In its heyday, this remarkable engine discharged 4 million gallons of effluent every 24 hours.

Recognised as a Site of Industrial Heritage Interest and Importance this Grade 2 listed building is a unique reminder of the remarkable success of Victorian engineering and technology.

With the assistance of Lottery funding, the engine and its house have been lovingly restored and renovated forming the centrepiece of a £4m regeneration scheme. The Pump House, now a working museum, offers members of the public firsthand experience of the engine in operation. But, to get to this stage, a certain amount of work was required to the building, particularly to the monumental windows which had been bricked up to avoid vandalism to the Beam Engine. The windows have now been opened up and fitted with protective screens that follow the lines of the arched windows. Selectaglaze provided a system of panels glazed with an anti-vandal polycarbonate sheet fixed to the outside of the window and finished in a dark green to match the window frame.

Dating back to the 1830’s, this beautifully historic building was Basingstoke’s Town Hall until the 1980’s, when it became The Willis Museum, named in honour of George Willis a local jeweller and philanthropist and former Basingstoke Mayor. The Museum has recently undergone a £600,000 refurbishment programme, which included the restoration of many of the building’s original features, unseen for decades, and the creation of an art gallery as a venue for local artists, groups and societies to host their exhibitions.

Security secondary glazing will also markedly reduce external noise, an important consideration for many galleries, particularly those in city locations. It will also significantly improve the thermal performance of the window, thus reducing heating costs. 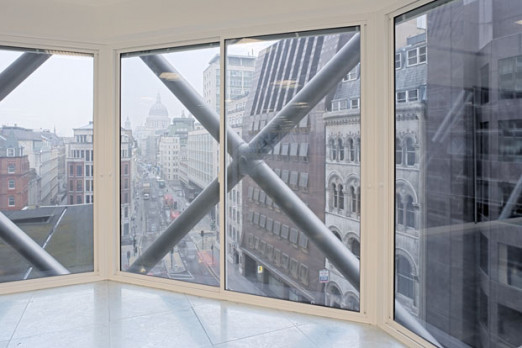