Middlesbrough Council developed the idea for Middlesbrough Sports Village in 2013 which included the construction of a 250m velodrome and a stadium to accommodate an eight lane track and field with seating for 650 people, as well as a five court racquet hall, gym, tennis courts and all-weather pitches. An attractive hard landscaping solution was needed to enhance the exterior appearance of the new £23 million Sports Village as a method of encouraging the community to visit the complex and Tobermore helped the council achieve this objective with the provision of modern Mayfair Flags – a paving slab with a granite aggregate surface layer that produces a striking, contemporary look.

The council assigned Leeds based architect, Enjoy Design Ltd, with the task of designing the project and Willmott Dixon was awarded the contract to manage the construction of the project. This was following the contractor successfully delivering six new schools in Middlesbrough as part of its BSF programme prior to this scheme being developed.

As part of the design, Enjoy Design Ltd was provided with the task of sourcing hard landscaping products that would achieve an aesthetically pleasing result. Tobermore provided the architect with Mayfair Flags as a method of meeting this requirement. Mayfair Flags are manufactured with a superb hard-wearing granite aggregate surface layer that produces a modern appearance similar to natural granite. The product was specified in the contrasting colours of Sandstone and Graphite to create a bold colour pattern for the external areas on site.

The construction works at Middlesbrough Sports Village was completed in 2015 with an absolutely beautiful result. The project was a large success with the complex achieving the status as a top-class venue for local, regional and national level competition in sports including athletics, cycling, basketball, netball, roller hockey, rugby and football. 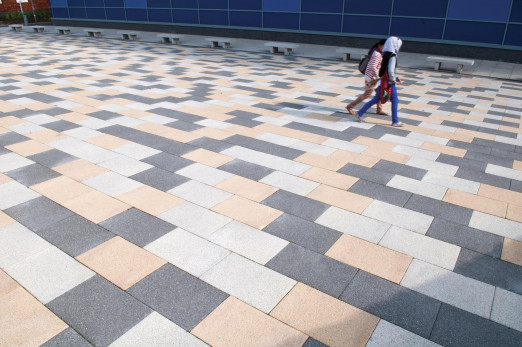